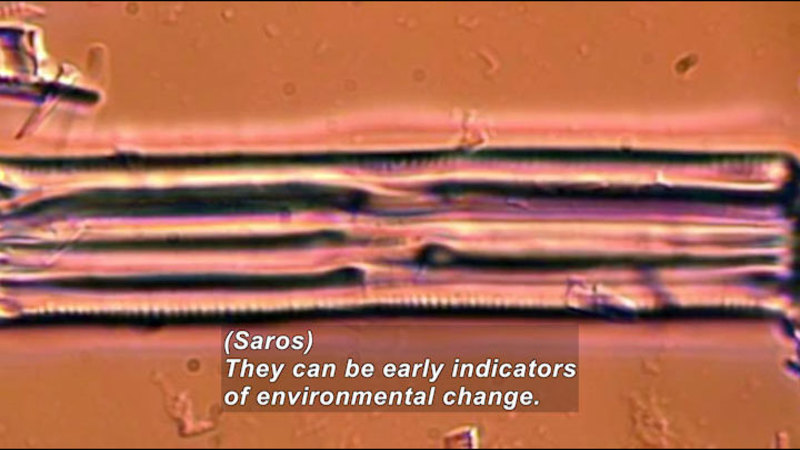 (Describer) Streams of light collide to create a globe filled with water. Title: Science Nation. With a foot pump, a man inflates a small boat, which a few people get into.

(male narrator) It's another summer day on the lake.

(Describer) One of them starts a motor.

There we go. Whoo-hoo!

(narrator) But this is no pleasure cruise.

(Describer) A cylinder floats in the water.

(woman) Okay. With support from the National Science Foundation, lake ecologist Jasmine Saros and her team from the University of Maine are plying the lake waters of southwestern Greenland, gathering samples of diatoms to study how climate change is affecting this Arctic ecosystem.

(Saros) A diatom is a type of algae, and it is different from other types of algae because it has what you could call a "glass" cell wall.

(narrator) They're gathering water and mud samples from lakes around the edge of the Russell Glacier. Saros is particularly interested in diatom population dynamics-- how different species thrive or falter under changing conditions.

(Saros) They can be early indicators of environmental change. So those silica cell walls

(Describer) Diatoms are viewed through microscopes.

basically can be deposited in sediments, and we can look over thousands of years and see which diatoms were there in the past.

(narrator) Greenland is an ideal place to take samples because the Arctic is warming faster than other parts of the globe. Even so, the water is still frigidly cold here,

and wet socks are a daily hazard. But Saros's research shows diatom populations respond to more than just rising temperatures. When temperature increases, you can see a change in how productive plants are on the landscape, and that can have implications for lakes too. Because plants secrete organic material that drains into lakes, and that affects how much light you'll see on lakes. There are several different ways that climate change can affect lake ecosystems.

It is a long, cold, hard, miserable day in the field. But when field work is done, the work is not.

(Describer) He carries a motor.

Because of the nature of this science,

(Describer) He puts it down.

there's a lot of work to do in the lab.

(O'Brien) Each night, they filter out the diatoms and culture them under a mix of different temperature, nutrient, and light conditions. Saros stresses the work isn't just about diatoms. She's focused on the broader picture. When we look at changes in diatoms in lakes, it's not because we're focused on, "Diatoms are changing. What's going to happen?" It's the bigger implications of that.

(narrator) Using diatoms is a tool to better understand how environmental change affects lake ecosystems. For Jasmine Saros, it's well worth the long, cold days on the water.

With support from the National Science Foundation, Lake Ecologist Jasmine Saros and her team from the University of Maine are gathering diatoms from the lake waters of southwestern Greenland. They are using the diatoms in their studies of how climate change is affecting this Arctic ecosystem. Diatoms are a type of algae that responds rapidly to environmental change. Diatom species generally associated with warmer conditions are increasing at unprecedented rates in the sediment record.