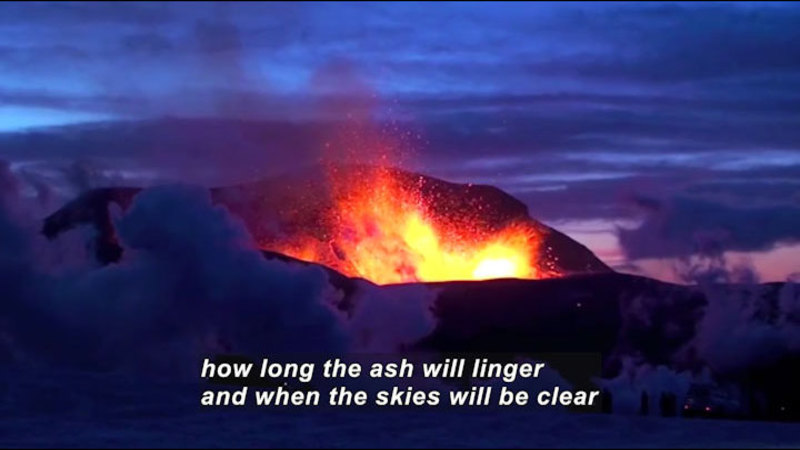 (male narrator) When a volcano erupted in Iceland in 2010, tiny ash particles filled the skies. Air traffic came to a grinding halt, costing billions of dollars.

(man) The Iceland eruption closed Heathrow Airport and many others throughout northern Europe. The fine ash gets into the engines, and the new hot-burning engines can melt the ash on the rotors and interfere with engine operation.

(narrator) With support from the National Science Foundation, volcanologist Dork Sahagian is learning more about the aerodynamic properties of the ash and how long different sizes and shapes stay in the atmosphere. Here's an image of the ash grain.

(narrator) Under a microscope, each particle looks different. They are interested in ones that float in the air the longest.

(narrator) How does this happen? That brings the team to this giant wind tunnel. We're gonna go to about 300 rpm on the fan.

(narrator) Because ash particles are difficult to see, the team demonstrates its study for us using aluminum foil. A flake, crumple, and ball. There it goes, there it goes.

(Describer) With large fans running, the small flakes are dropped.

(narrator) They release the particles in the wind tunnel, and cameras track them.

(Sahagian) What we're doing here is finding out just how much the shape matters. If you look at the pattern, the smaller balls fell first.

(narrator) All the particles weigh the same, but the round balls dropped first, then the crumples. Flakes stay airborne the longest, as they've found when experimenting with real ash.

(Describer) Data is entered into graphs.

(man) This is a Web application.

(narrator) Using the findings, Alexander Proussevitch is developing computer models to better forecast how ash will behave in the atmosphere. In the future, when a volcano erupts, experts will be able to predict more accurately how long the ash will linger and when the skies will be clear for planes to fly safely again.

Volcanic ash is known to present hazards to aviation, infrastructure, agriculture, and human and animal health. Airborne ash coats the exteriors of aircraft, enters modern jet engines and melts while coating the interior parts thus causing damage and failure. With support from the National Science Foundation, Volcanologist Dork Sahagian and his colleagues are learning more about the aerodynamic properties of ash, and how long different sizes and shapes stay in the atmosphere. They use a wind tunnel to study how ash travels in the atmosphere during and after volcanic eruptions. They want to develop ways to predict when and for how long damaging ash will fill the skies, and when it’s safe to fly again.