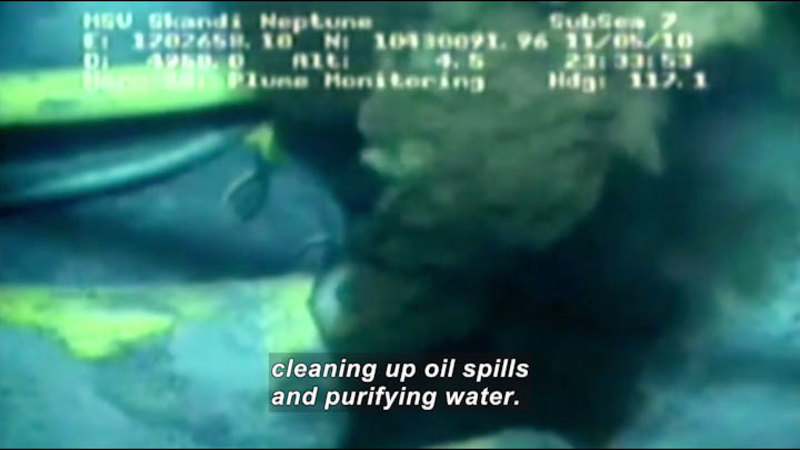 (Describer) Streams of light collide to create a globe filled with water. Title: Science Nation. A flat green pad of cactus is cut into strips which are cooked with onions in a pan, and later served on a plate.

(male narrator) The prickly pear cactus salad. It's a delicacy in Mexico, but it seems these cacti have uses beyond the culinary, cleaning up oil spills and purifying water.

(woman) You can see it's easy to grow.

(narrator) With support from the National Science Foundation, University of South Florida chemical engineer Norma Alcantar is using the gooey flesh of the cactus, called mucilage, to clean up polluted water. Her interest in green chemistry came from her grandmother, who told her of using cacti to clean river water in rural Mexico as a young woman. They will cut the cactus plant and boil it and use the water from that preparation to clean the water.

(narrator) When Alcantar tested that process in her lab, she was amazed at the results.

(Alcantar) I was, like, "Are you serious? It really works?" I thought I will see an effect, but I didn't think I'd see an effect so dramatic.

(narrator) These "bio beads" are made of mucilage.

(Alcantar) This is a controlled initial concentration of the blue dye versus the one that has been in contact with the beads.

(narrator) After an oil spill, cactus goo could be an alternative to chemical dispersants, like those used in the Deepwater Horizon cleanup.

(Alcantar) The same action can be done with a low concentration. It becomes sustainable and inexpensive.

(narrator) Alcantar did water quality tests in Haitian refugee camps after the 2010 earthquake, finding high levels of heavy metals and bacteria in the drinking water. While there, she kept an eye out for cacti. They were everywhere.

(Describer) She shoots video of cacti on location.

(Alcantar) This is in a gas station.

(narrator) Tests at her lab confirmed that mucilage could successfully clean the polluted water from Haiti, and that's significant. In the future, cacti could be harvested locally to decontaminate drinking water quickly after disaster strikes. Using a natural product to clean water. It's a sharp idea. After all, there's no reason to get stuck on the old way of doing things.

University of South Florida engineering professor Norma Alcantar and her team are using the Prickly Pear Cacti to clean up oil and other toxins from water. With support from the National Science Foundation, Alcantar has spent the last few years confirming something that her grandmother told her years ago – that cacti can purify water. The objectives of this research are to develop a water purification system based on an economically feasible method of water purification.