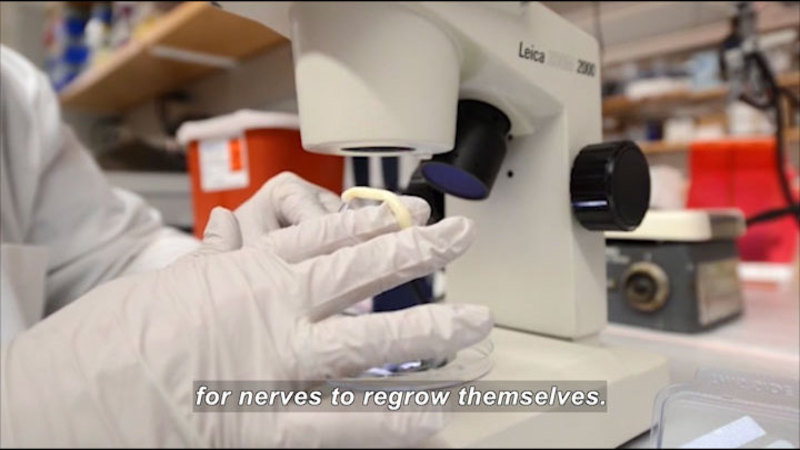 (Describer) Streams of light collide to create a globe filled with water. Title: Science Nation. A bombing is shown through green-tinted night-vision.

(male narrator) Combat, cancer, and accidents. All can cause devastating nerve injuries. Sometimes the body heals on its own. Peripheral nerves in the arms and the face have an inherent ability to regenerate, but only under ideal circumstances.

(narrator) With support from the National Science Foundation, University of Florida biomedical engineer Christine Schmidt is working to restore nerve function when injuries are more complicated.

We took that muscle over the back of his elbow.

(narrator) Surgeons can move a nerve from one part of a patient's body to another. Schmidt has developed a method that grafts cadaver tissue onto the damaged area to act as a scaffold for nerves to regrow themselves.

(Schmidt) Basically, we're removing all the cellular material that would cause rejection, but leave behind the native architectures. You're putting this graft into the site of injury. That graft is providing a scaffold for blood vessels to grow in. Once you have recellularization, nerve fibers can regrow, then ultimately regain that muscle function.

(narrator) Navy veteran Edward Bonfiglio, wounded in Afghanistan, faced the prospect of an amputation. A graft was a welcome option. The company AxoGn distributes the grafts, which were developed based on work done in Schmidt's lab.

(Schmidt) His family asked, "Are there alternatives?"

He was a young, healthy, vibrant guy. A great surgeon at Walter Reed worked with them to find those options.

This is some micronized nerve that you're working with?

(narrator) Schmidt and her team are testing other approaches to stimulate nerve growth using natural sugar molecules found in the body as building blocks, eliminating the need to transplant tissue.

(Schmidt) You don't take it from a body. You grow it.

(narrator) While the goal in nerve regeneration is reversing paralysis, Schmidt says intermediate successes, like improving lung or bladder function, can be invaluable to patients and their families. Rather than saying we're going to try to tackle this humongously complex beast, and try to get the patient to be exactly like they were before, why not provide function that will benefit this patient?

(narrator) After a serious injury, it's not just about getting your nerve back, it's growing it back.

Military combat, cancer and accidents – all can cause devastating nerve injuries. Sometimes, the body heals on its own. With support from the National Science Foundation, biomedical engineer Christine Schmidt and her team are working to restore nerve function when injuries are more complicated. Surgeons can sometimes move a nerve from one part of a patient’s body to another. Schmidt has developed a method that grafts cadaver tissue onto the damaged area to act as a scaffold for nerves to re-grow themselves.