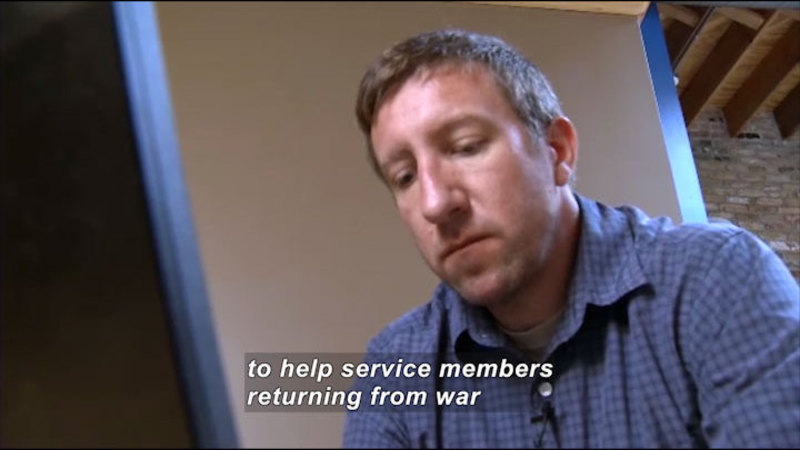 (Describer) Streams of light collide to create a globe filled with water. Title: Science Nation. A solider fires between a gap in two walls.

(male narrator) After a tour of duty in a war, adjusting to life back home can be tough.

(man) When I got back from Iraq in 2005, I had trouble relating to people in civilian life.

(narrator) Mike Nowacki, a former staff sergeant in the U.S. Army and National Guard, says he felt constant stress. Being on guard at all times. Constantly looking for some threat that's not gonna be there.

We've got 37% of veterans coming home from a deployment with a mental health disorder. Only half of them seek care.

(Describer) Nowacki types at it.

It's been optimizd through careful research to help service members returning from war make a more successful transition.

(man) What you're doing now builds mental strength and resilience.

(narrator) Veterans log on and answer a short questionnaire. They can remain anonymous. An avatar, which can take on different looks, marches them through tasks in video game fashion. The tone is easygoing, but the issues are serious.

Those are initials of friends that I lost during my deployments.

(narrator) Former Staff Sergeant Robert Rudd served in Afghanistan and is one of Prevail's "peer veterans." Research indicates online chats with fellow vets are key to the program's success. It's not us saying, "You have something wrong." It's teaching them how to identify within themselves that maybe they have something wrong.

(narrator) Psychologist Stevan Hobfall is assessing the effectiveness of the program. He says it won't replace face-to-face therapy, but it's making it easier for vets to begin to find help. Veterans are very satisfied with it. Not all of them, but in very high percentages.

(narrator) The VetsPrevail program is available to veterans now. A version for active-duty military called WarriorsPrevail is in the works. The goal? Helping combat veterans feel more at ease when they come home.