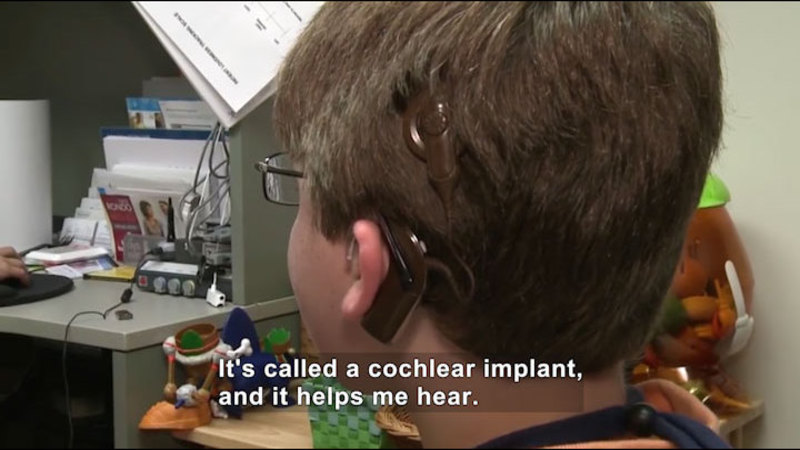 (Describer) Streams of light collide to create a globe filled with water. Title: Science Nation. A boy sits in a chair.

Can you please lower it?

(Describer) A girl does the same.

A little down. [beeping]

That's good. ...and his twin sister, Joanie, were born deaf, but they've been hearing nearly all their lives.

(narrator) They're getting a tune-up. How's that sound? That's good. When they first heard, and they were just babies,

their reaction was really wonderful.

(Describer) They talk to each other.

Have you heard about that new movie coming out?

(narrator) As life-changing as cochlear implants have been for them, the devices are still far from perfect.

[distorted] Do you want fried chicken or do you want pizza for dinner?

(woman) Sound is muffled, dampened. They don't get the same span of sound as we normally would. How's the simulation work going?

(narrator) With support from the National Science Foundation, biomedical engineer Pamela Bhatti and her team at Georgia Tech are improving the sound quality of these implants.

(narrator) A cochlear implant is a small sound system. A microphone worn behind the ear picks up sounds that are sent wirelessly to an implant inserted in the cochlea, deep inside the ear.

The cochlea doesn't work. So the computer sends signals to the brain, which is what the cochlea's supposed to do.

(narrator) More specifically, the implant does what tiny hairs in the cochlea should be doing, converting sound waves into electrical signals that the brain can understand.

(narrator) Bhatti and her team have improved the audio quality of implants by building in more electrodes, which provide a wider range of frequencies. Instead of bundling electrodes by hand, they've developed thin film arrays of microfabricated electrodes, borrowing technologies used to manufacture integrated circuits. Their new design also makes it easier to insert.

(Bhatti) Our cable is appreciably thinner.

You also have the ability to potentially reduce the cost.

(narrator) And Bhatti says the cochlear implant they're developing is still being tested. It is designed to cover a broader spectrum to treat low-frequency hearing loss that many, especially rock-and-roll baby boomers, are experiencing from overexposure to loud noises.

So, better, smaller implants for more realistic sound quality. For those who depend on this technology for hearing, it's music to their ears.

The cochlear implant is widely considered to be the most successful neural prosthetic on the market. The implant, which helps individuals who are deaf perceive sound, translates auditory information into electrical signals that go directly to the brain, bypassing cells that don't serve this function as they should because they are damaged. Led by engineer Pamela Bhatti at the Georgia Institute of Technology, a team of researchers at both Georgia Tech and the Georgia Regents University created a new type of interface between the device and the brain that could dramatically improve the sound quality of the next generation of implants.