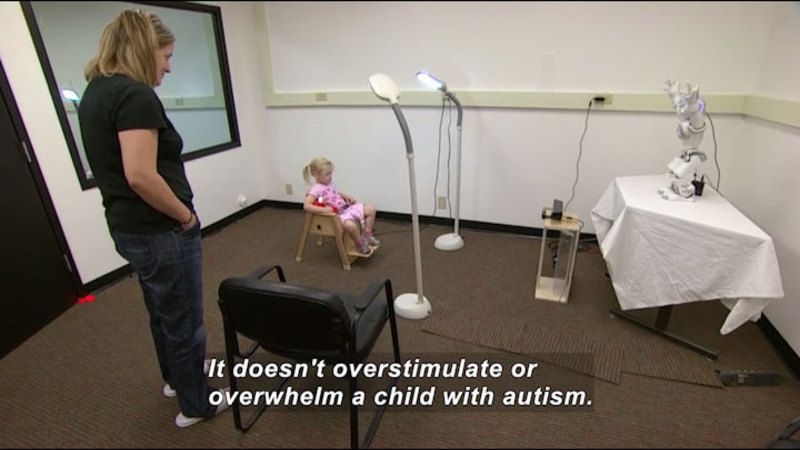 (Describer) Streams of light collide to create a globe filled with water. Title: Science Nation. A little grey robot has flashing eyes and speakers for ears.

Hello. I want to play with you.

(male narrator) This robot, nicknamed Russell, is being tested by two pre-schoolers. Lincoln is four. Madelyn is three. Look at what I am doing.

(Describer) It waves its arm.

Both children have autism. Studies show children with autism lack certain social skills important for learning, like the ability to imitate others. You do it.

I have not gotten him to imitate anything.

have really early impairments in social interaction and social communication.

(narrator) Children with autism also have an affinity for technology.

Children with autism understand physical world much better than the social world. There you go.

(narrator) With support from the National Science Foundation, mechanical and computer engineer Nilanjan Sarkar and psychologist Zachary Warren, at Vanderbilt University, are developing a learning environment for kids with autism built around state-of-the-art technologies.

(Warren) This is a thank-you bow.

(narrator) Including this robot. It has some characteristics of human, but it is not complex enough. It doesn't overstimulate or overwhelm a child with autism. Now copy me.

(narrator) The team outfitted this room with cameras and Kinect, a video gaming sensor that tracks and records the child's movements. That information is sent to the robot to provide feedback. You, put it here. Higher.

(Describer) When Russell lifts its arms, Madelyn copies it.

(Sarkar) The robot must understand the real-time need of the child-- not only how well he or she is performing, but how well he's enjoying the activities. I do it again.

She can imitate me, but it's exciting to see her transferring that skill to somewhere else. Raise your hands like this.

(narrator) Team members exercise with the children. Sarkar says the kids pay more attention to the robot than the humans.

Talk about not paying any attention to you at all.

(Dean) He watched the robot the whole time.

(Describer) A computer-animated boy talks on a monitor.

(narrator) Sarkar says they are also developing computer games, including one teaching children to read facial expressions, an issue for many with autism. Think about the learning opportunities that might come from that, how powerful that could be.

(narrator) Sarkar sees the day when robots will go home and help kids like Madelyn and Lincoln navigate these games and maybe help them feel more comfortable in real-life social situations too.

With support from the National Science Foundation, mechanical and computer engineer Nilanjan Sarkar and psychologist Zachary Warren at Vanderbilt University have developed a learning environment for kids with autism, built around state-of-the-art technologies. One of those state-of-the-art technologies is a humanoid robot, nicknamed Russell, who works with the children on their ability to imitate others. The robot has some of the characteristics of a human, but it’s not as complex, so it doesn’t overstimulate or overwhelm a child with autism.