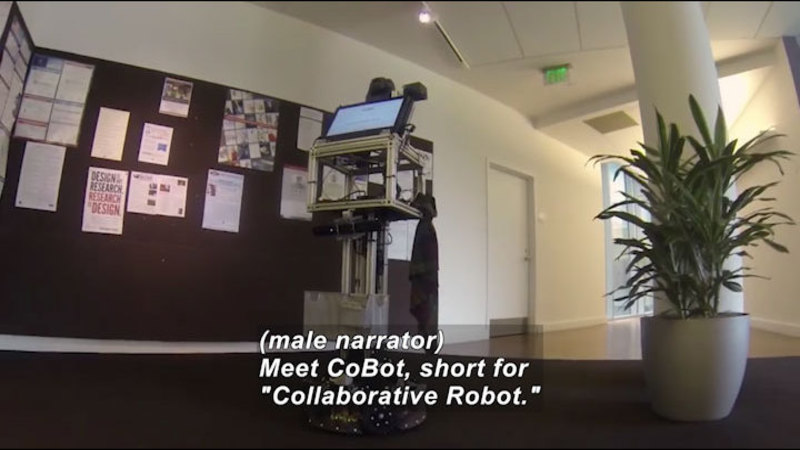 (Describer) Streams of light collide to create a globe filled with water. Title: Science Nation. A tablet screen and camera on a stand rolls on small wheels.

(male narrator) Meet CoBot, short for "Collaborative Robot." You might call it "Help On Wheels."

Many people have done moving robots, and others continue-- everybody does. The thing that is beautiful about CoBot is that nobody follows CoBot. It goes by itself. Please follow me to Room 7.

(narrator) With support from the National Science Foundation, computer scientist Manuela Veloso and her team at Carnegie Mellon University are developing CoBot as an autonomous indoor service robot to interact with people and provide help.

(Veloso narrating) "Escort me. "Transport this from one place to another. Deliver a message. Pick up that for me." Navigation challenges became a part of the service robot that we had to address.

(narrator) Getting on CoBot's dance card is simple. Log on to a Web site, select a task, book a time, and it's on the job. CoBot is not just following a pre-programmed floor plan. It's recording every turn, monitoring the walls, calculating planar surfaces, plotting window and door locations, noting where the carpet and hardwood floor meet, learning the space as it moves along--navigating.

(Veloso) This motion of the robot, plus the sensing of this plane detection, allows the robot to estimate its location in the building.

[beeping] Going to the office--

(Describer) Co-Bot turns from Veloso and rolls away.

(narrator) A key to its success is symbiotic autonomy-- knowing when and where to ask humans for help, like pressing buttons in the elevator.

(man) I press seven. And searching the Web when it doesn't know something. Bring me a hamburger. Object is not in my knowledge base. I will search the Web--

(narrator) When will you see a CoBot rolling down a hall near you? Veloso sees lots of opportunities, but she wonders, "Are we ready?"

(narrator) Not a problem. Send it on over. I've got a long to-do list, and I could use the help.

With support from the National Science Foundation, computer scientist Manuela Veloso and her team at Carnegie Mellon University are developing CoBots, autonomous indoor service robots to interact with people and provide help. CoBots can transport objects, deliver messages, and escort people to places. They are able to plan their paths and smoothly navigate autonomously.