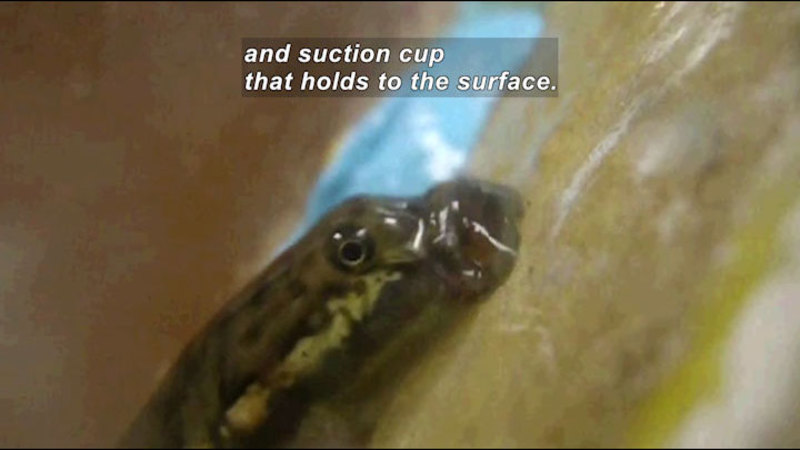 (Describer) In an animation, streams of light collide to create a globe filled with water. Title: Science Nation. Circles highlight creatures climbing rocks behind a waterfall.

(male) Lots of big waterfalls, and the fish have no problems climbing them.

(male narrator) These are inching climbers. They thrive in the waters of Hawaii. The fish has an amazing life story. They hatch in streams and are washed out to sea. As juveniles, they head back toward land, facing a gauntlet of predators. Then to reach the safe haven of their freshwater spawning area, they literally scale waterfalls. What would that climb be like for a human? Comparing to the organism's size, it's like climbing Mount Everest three times in a short period of time.

(narrator) With support from the National Science Foundation, biologist Heiko Schoenfuss of St. Cloud State University, and his team, study these extraordinary fish. The goal: to better understand how they've adapted and evolved, in form and function, to accomplish such vertical feats.

The inching climber is a species of goby fish. Check out its suckers. That's how it climbs the waterfall-- by suctioning onto the rock behind.

(Describer) It sticks out the bottom of its mouth to press against a surface.

(male) This is an adult Sicyopterus stimpsoni. We see the enlarged upper lip and suction cup that holds to the surface. It uses an inching-up climb style, advances the head, attaches with the oral sucker, moves the rest of the body upwards, and then attaches with a pelvic sucker.

(narrator) Key anatomical features show how the fish has adapted to its life cycle. Schoenfuss says understanding how these highly-specialized organisms have evolved has implications beyond just one type of fish.

(male) The challenge, in our case, is climbing waterfalls. It can also be extrapolated to other species. Whether it's a human-induced selective pressure-- pollution, or warming of waters-- we can learn about how adaptation occurs over long and short periods of time.

(narrator) Schoenfuss studies many fish in his lab, but no inching climbers. They don't do well in tanks, but he and his team go to Hawaii to study them.

(male) I want to learn how the fish's physiology is related to anatomy: how much muscle is working, how harmonious the muscles are with the body movement.

(narrator) Schoenfuss also studies how fish in rivers like the Mississippi, near his Minnesota campus, adapt to chemicals in the water. He's particularly concerned about pharmaceuticals and other bioactive products that we humans let seep into our waterways. Trying to remove them from the water column and keeping chemicals from going in, is a big challenge.

(narrator) Maybe not as big a challenge as the harrowing journey of the inching climber. Now that's taking evolution to...new heights?

The species of Goby fish, Sicyopterus stimpsoni, also known as the inching climber, thrives in the waters off Hawaii. To reach the safe haven of its freshwater spawning area, this Goby must scale a waterfall, or at least the rock behind it, using suction cups on its body. With support from the National Science Foundation, scientists at St. Cloud and Clemson Universities study these extraordinary fish to better understand how they’ve adapted and evolved in order to achieve such vertical feats. Part of the National Science Foundation Series “Science Nation.”