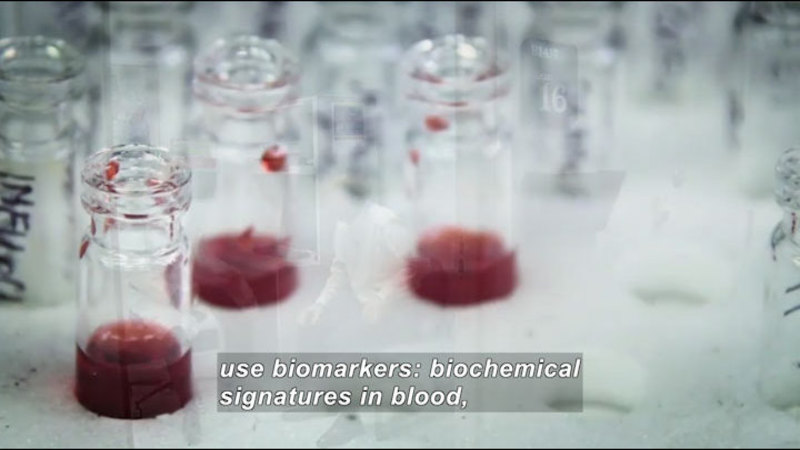 (Describer) In an animation, streams of light collide to create a globe filled with water. Title: Science Nation. A man walks into a lobby.

(male narrator) After years of keeping a wary eye on troubling test results, Marshall Blau was diagnosed with prostate cancer. He still had tough decisions to make about treatment.

(male) Am I gonna do anything or continue with watchful waiting? With more information, it might have made that decision easier-- when to do it and what to do.

(Describer) A doctor meets him in an exam room.

(narrator) To diagnose prostate cancer, urologists like John Wei use biomarkers: biochemical signatures in blood, urine, or tissue that suggest the disease may be present. Some are even genetic.

(male) The problem for doctors practicing medicine is when and which tests to use, and what does it all mean.

(narrator) With support from the National Science Foundation, engineer Brian Denton and a team at the University of Michigan are developing computational models to evaluate biomarkers. They sift through vast medical databases and then use Denton's engineering methods to assess which are effective predictors of prostate cancer. We use large data sets that contain information about patients' test results, biomarker test results, biopsy results, whether or not they had treatment.

(Describer) He draws a diagram on a whiteboard.

We use these to help define data-driven assumptions to build these models.

(narrator) Traditionally, doctors evaluate biomarkers in clinical trials. But those are expensive, complicated, and can take decades to complete. With new biomarkers being identified regularly, Denton says computational modeling is a quicker way to identify the most promising ones.

(male) The benefits are we can do these tests rapidly and we can test many different ways of using biomarkers. We can test thousands of different protocols to see which might be the best.

(Describer) A doctor walks through a lab.

(narrator) Pathologist Scott Tomlins specializes in prostate cancer. He and Doctor Wei are part of the team helping Denton develop and validate the models, with the goal of making better information available to doctors and patients when it is time to make difficult choices. My goal is to see more being used so we don't prescribe biopsies where there's no cancer. If patients have bad cancer, we can diagnose it early.

(Describer) He looks through a microscope.

Engineering better ways to evaluate cancer biomarkers; a good model for the future.

To diagnose prostate cancer, urologists John Wei and pathologists, Scott Tomlins, at the University of Michigan Medical Center, use biomarkers, which are biochemical signatures in blood, urine, and tissue that suggest the disease may be present. With support from the National Science Foundation, engineer Brian Denton is working with a multidisciplinary team that includes Wei and Tomlins to develop a quicker and less expensive way to evaluate biomarkers, using computational models. Part of the National Science Foundation Series “Science Nation.”