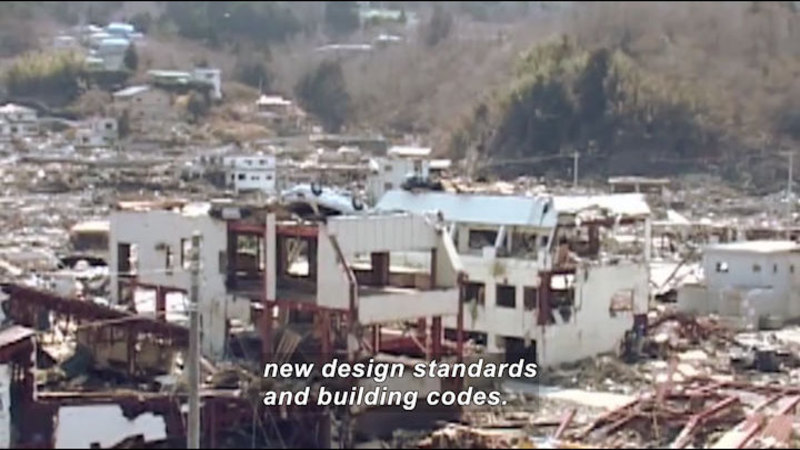 (Describer) In an animation, streams of light collide to create a globe filled with water. Title: Science Nation. Photos from a surveillance camera show water rushing into a parking lot.

(male narrator) In a tsunami, devastation is created by far more than the wave itself.

(Describer) It carries cars with it.

Debris that hits homes and other structures plays a huge roll in a tsunami's destructive power. But until now, engineers could only guess at the forces at work when debris, like a floating telephone pole, hits a house.

(narrator) With support from the National Science Foundation, engineers from across the country have teamed up to design and implement some large-scale tests aimed at better understanding exactly what happens when debris strikes. The research is looking at the types of debris in a typical tsunami environment and what forces are being generated from that.

(Describer) A plank is bent until cracks appear.

(narrator) When we visited, structural engineer Clay Naito and his team at Lehigh University in Pennsylvania were conducting a test on a new type of blast-resistant wall. Recently this test facility was transformed into Tsunami Central. The idea: recreate full-scale debris strikes and record exactly what happens.

(Describer) A pole swings into a girder.

bang! They started with 20-foot telephone poles then moved on to a 5,000-pound shipping container.

(male) The goal was to figure out the forces being generated at different impact velocities. We do a quick release and it hits the load cells.

(narrator) Key was the measuring device, called a load cell, that recorded the impact data.

(male) You might have forces of half a million pounds that could occur in a very short duration of 1/100 second.

(Describer) He points out colors on a computer model.

It shows the impact event as we impact the load cells.

(narrator) Naito and his colleagues use the data to validate computer models designed to predict how different types of debris respond under the stress of impact.

(Describer) Outside, smoke rises from rubble.

The ultimate goal: to use the lessons learned through these tests to establish new design standards and building codes. We're able to then take those properties and produce an estimate of what force the structural engineer needs to design the building for. Within a couple years, everything we've learned should be applied and should be required.

(narrator) It just goes to show, for engineers, it never hurts to be awash in data.

In a tsunami, devastation is created by far more than the wave itself. Debris that hits homes and other structures plays a huge role in a tsunami’s destructive power. But until now, engineers could only estimate the forces at work when debris, such as a floating telephone pole, hits a house. With support from the National Science Foundation, engineers from across the country have teamed up to design and carry out a series of large-scale tests aimed at better understanding exactly what happens when debris strikes. Part of the National Science Foundation Series “Science Nation.”