Science Nation: As Fast As Their Tiny Bot Legs Will Carry Them! 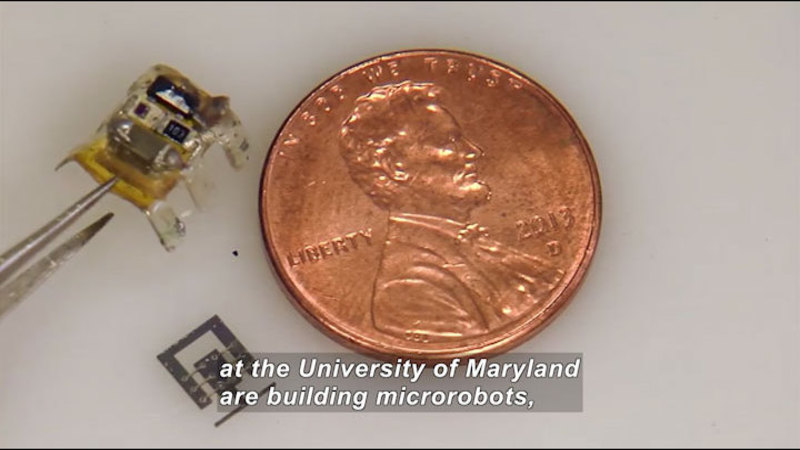 (Describer) In an animation, streams of light collide to create a globe filled with water. Title: Science Nation. A black insect crawls with its six legs.

(male narrator) Bigger isn't always better. Take insects: they're small, yet a cockroach can outmaneuver a human with a rolled-up newspaper. Fleas can jump 200 times their height.

(narrator) What if robots could have the same moves?

(narrator) With support from the National Science Foundation, engineer Sarah Bergbreiter and colleagues at the University of Maryland are building microrobots, using insects as inspiration, starting with their legs. The objective of this project is to create legs that ultimately allow a millimeter-scale robot to traverse rough terrain at high speeds.

(narrator) Bergbreiter's robots are so small, her team uses a microscope to build them.

(female) How do you build anything at this scale?

(Describer) She points out a series of diagrams.

We use the same processes used to make integrated circuits. These are two legs. This is our jumping mechanism.

(narrator) Many insects jump to clear obstacles. Bergbreiter is working to build that capability into some of the microbots.

(Describer) She squeezes a part for one with tweezers.

(female) We can compress this and store energy in those rubber bands and release those for a jump.

(narrator) They test different materials and designs on bigger bots before scaling them down.

(female) We have a little magnetic-leg robot.

(Describer) She holds one that looks like a table with six moving legs.

(narrator) One challenge is determining how microrobots should move. They test that in a preliminary design process using magnets instead of motors. This leg is made with a flexible silicone rubber. A kneecap prevents the leg from going in this direction, but bends in this direction. We have a foot, so basically, push forward and walk.

(narrator) These so-called "tiny terps" are used to study sensing and cooperation at small scales.

(female) It has two boards with a microcontroller, a gyroscope, and accelerometer.

There's a battery here that attaches with magnets. Ultimately, we want sensors on them as well.

(narrator) Bergbreiter sees the microbots as mobile sensor platforms, carrying tools like cameras into small spaces for surveillance, microsurgery, to monitor the structural safety of buildings and bridges, and even deploying on search and rescue missions.

(female) My picture is you have a bucket of these small robots. You dump 'em into rubble after a disaster, and they have just enough energy to find somebody.

(narrator) Tall orders, indeed. It seems these tiny robot legs will have some big shoes to fill.

Imagine robots no bigger than a fingertip scrambling through the rubble of a disaster site to search for victims or to assess damage. That’s the vision of engineer Sarah Bergbreiter and her research team at the University of Maryland. With support from the National Science Foundation (NSF), they’re building micro-robots to create legs that will ultimately allow a millimeter-scale robot to traverse rough terrain at high speeds. Part of the National Science Foundation Series “Science Nation.”