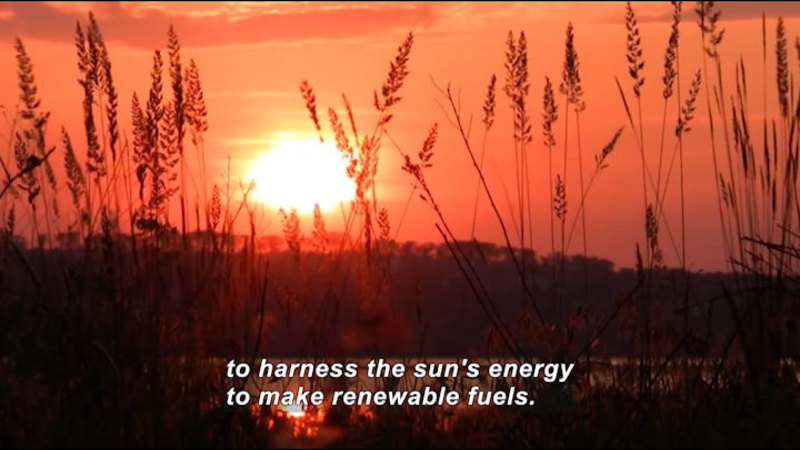 (Describer) In an animation, streams of light collide to create a globe filled with water. Title: Science Nation. A blue light quickly flashes.

(male narrator) Cal Tech chemistry professor Harry Gray is meeting with some of his troops in this laser laboratory.

(male) It's a tungsten aryl isocyanide. It absorbs an enormous amount of blue light.

(narrator) With support from the National Science Foundation and its Center for Innovation in Solar Fuels, Gray, his troops, and a team of world-class chemists are spearheading a special campaign to harness the sun's energy to make renewable fuels.

(male) It is artificial photosynthesis. It's using man-made components to do what nature has been doing for billions of years.

(narrator) They're searching for a metal oxide catalyst, essentially a chemical converter, that will put the energy in sunlight to work breaking apart water molecules to make hydrogen fuel. That's where the lasers come in. Today they are testing tungsten compounds to see how effective they are in splitting H2O into H's and O's. Up until now, the most effective catalysts have used pricey, precious metals. We have demonstrations where we can split water with sunlight with high efficiencies.

(Describer) A car is labelled, “Clean Energy – powered by Hydrogen”.

It's just they cost so much. More importantly, the materials that are in them are scarce. Platinum is a good example.

(Describer) Chemical models are shown with people's names under them.

Our program is aimed at getting earth-abundant materials-- things like iron and cobalt and tungsten.

(Describer) He speaks with young people.

(narrator) Gray's solar army includes college and high school kids from around the country, even Europe. Their primary task: help identify the best catalysts out of millions of possible candidates.

The ultimate goal is enabling large-scale production of clean, renewable energy. Every human being on earth is gonna be impacted by what we're doing now in this field because every human being on this earth has to have energy to support life.

(narrator) In the battle for clean, renewable fuel, there's great chemistry in these ranks.

Solar panels are becoming a familiar site in communities across the United States, but what about solar fuels? A solar fuel is produced from sunlight through artificial photosynthesis, mimicking what Mother Nature has been doing for billions of years. Many chemists and chemical engineers are working to make solar fuels a viable option in the future. Part of the National Science Foundation Series “Science Nation.”