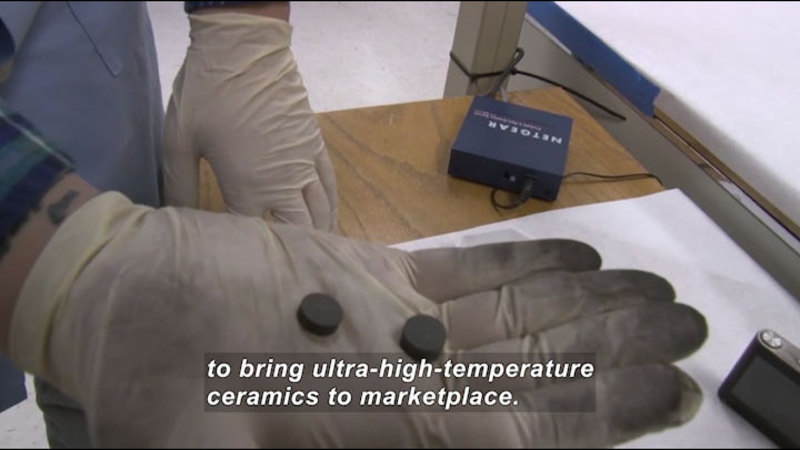 (Describer) A orange glow turns clear under a Space Shuttle on a launchpad, and smoke billows out.

(male narrator) Watch a launch like this and you wonder, "How do they make engine parts so durable they can withstand a fiery inferno?" Those are no run-of-the-mill nozzles on the rockets. They're made of high-performance ceramics.

(female) When you're trying to push materials to extreme limits,

most metals start to soften and give out at high temperatures. Ceramics are very stiff.

(Describer) Small pieces are combined in a factory.

(narrator) A key to building denser, stronger materials that won't fail or fracture under extreme conditions, is the manufacture of ultra-high temperature, or UHT, ceramics.

(Describer) They're treated in a large cylinder.

(Describer) They're taken out and checked.

(narrator) With support from the National Science Foundation, material scientist Holly Shulman and her team at a company called Ceralink are developing UHT ceramics using a new method that harnesses the power of microwaves.

(Describer) A kitchen microwave shuts off.

(female) Instead of the way food heats, which is based on water heating within the food, we can actually make that work in ceramic materials to heat them internally and cause them to densify very quickly and with huge energy savings.

(Describer) At the factory, an operator pushes buttons.

(narrator) At Ceralink, the machines they use to make the UHT ceramics still fire up to high temperatures. Rather than combining the heat with high pressure to push the atoms in the material together and make it super-hard and strong, they use microwaves. It's a process called enhanced diffusion. Instead of having to use high pressures, we are investigating the use of microwaves for enhanced diffusion. Then it can be done at atmospheric pressure.

(narrator) The goal is to make the industrial manufacture of high-quality UHT ceramic parts faster and cheaper. Take this silicon carbide filter designed to strain molten metal. It gets extruded in an additive manufacturing process called robocast, then fired in Ceralink's UHT microwave assist furnace.

(female) It's squeezed out like toothpaste or Playdough, and it builds up a part in three dimensions. The firing, by using our type of technology, is much faster.

(narrator) Faster, cost-effective methods to bring ultra-high-temperature ceramics to marketplace. It's an idea that's heating up.

A key to building denser, stronger materials that won’t fail or fracture under extreme conditions is the manufacture of ultra-high temperature, or UHT, ceramics. UHT ceramics can withstand highly extreme conditions, such as the heat coming out of a rocket as its launching into space. Part of the National Science Foundation Series “Science Nation.”