Science Nation: Check Out the Assembly Line of the Future 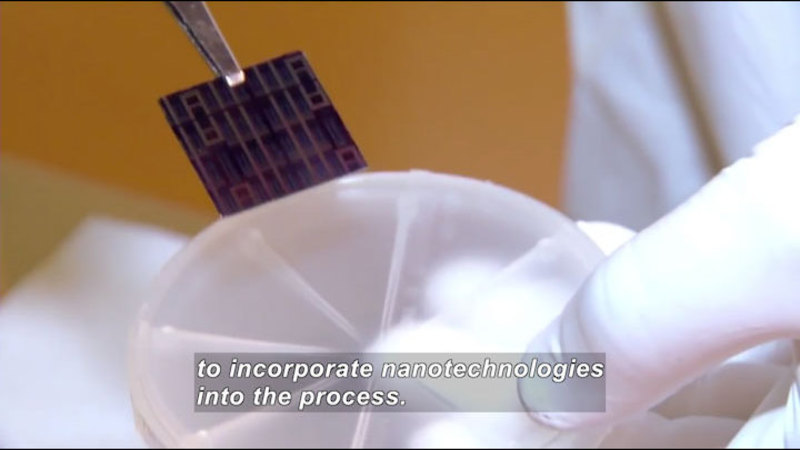 (Describer) In an animation, streams of light collide to create a globe filled with water. Title: Science Nation. Wearing gloves, a worker feeds a clear film around the spokes of a machine.

(male narrator) The manufacturing in this specially lit clean room is about to go mainstream. Tiny nanodevices are embedded and rolling off the presses.

Think of it as a leap forward in fabrication. In the future, these methods could bring clothing that protect soldiers from chemical weapons or small Band-Aids that constantly monitor vital signs in real time, whether we're at work or at play.

You have something that performs better and is less expensive. That's the heart of nanomanufacturing.

(narrator) With support from the National Science Foundation, University of Massachusetts Amherst chemical engineer Jim Watkins and his team at the NSF Center for Hierarchical Manufacturing are working to take nanotech from the lab bench to an industrial scale.

(Describer) Film winds through a much larger machine.

(male) The center paves that road from the laboratory to a manufacturable platform where industry can use it in a real-world process to make products that people want and can afford.

(narrator) This roll to roll process is already used in traditional manufacturing. But now Watkins and his team are developing methods to incorporate nanotechnologies into the process. That's of high interest to Jim Casey, who works for FLEXcon, a company that manufactures labels and coatings using a roll to roll system.

(male) But we are working in areas with antimicrobial surfaces, some health monitoring systems, some defense applications. The application potential is huge and the opportunities overwhelming.

(narrator) It's a big job working with materials this small. Nanoparticles are about 100,000 times thinner than a human hair.

(Describer) At the smaller machine...

The wet film now on the outside of this roll, travels up...

(narrator) The team is working on a nanomanufacturing process to make printable coatings that improve the way solar panels absorb and direct light. Watkins says there's a similar process to light up a room.

(male) On windows, they bend light to illuminate a room's top and bottom, improving ambient lighting.

(narrator) Communications is another area ripe for nanomanufacturing.

(male) We can use nanotechnology to shrink the size of an antenna and improve the sensitivity of the sensor.

(narrator) They are also looking to use self-assembling nanoproducts that could have applications for many industries.

(male) We build inks that are composed of macromolecules, nanoparticles, nanotubes, nanorods. These systems will spontaneously assemble into the structure morphology that we want, on their own.

(narrator) Down the line, the applications for nanomanufactured products are nearly endless. Better sensors could improve cancer imaging and make the lines in airport security dwindle away. It's all about working with industries to expand their reach into this brave, tiny, new world.

There’s no shortage of ideas about how to use nanotechnology, but one of the major hurdles is how to manufacture some of the new products on a large scale. With support from the National Science Foundation (NSF), UMass Amherst chemical engineer Jim Watkins and his team are working to make nanotechnology more practical for industrial scale manufacturing. Part of the National Science Foundation Series “Science Nation.”