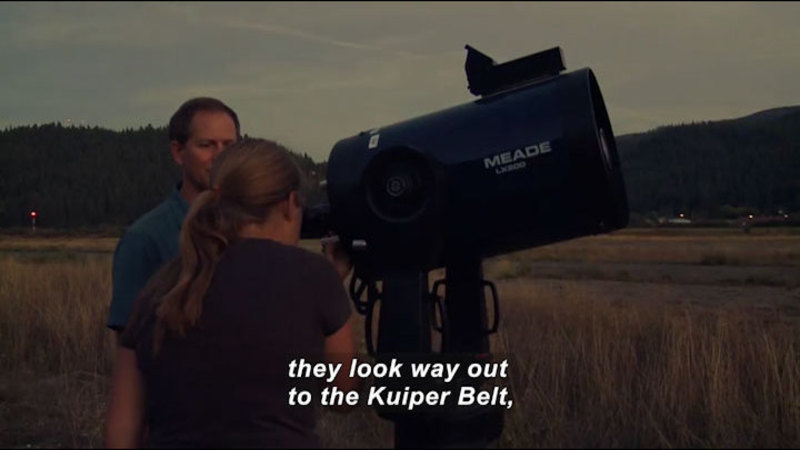 (Describer) In an animation, streams of light collide to create a globe filled with water. Title: Science Nation. Two people place a short but wide telescope onto a tripod.

(male) Put it right up here.

(male narrator) When these young astronomers look at the sky, they look way out to the Kuiper Belt, the cloud of icy, rocky debris that litters the solar system out beyond the planets. One tool we use for studying the outer solar system is an occultation:

this big, fancy word that basically means something gets in front of something else.

That information includes the latitude and longitude.

(narrator) They provide equipment and training to 14 small, Western communities, where night skies are clear and dark. Teachers and students search for sizeable chunks of Kuiper Belt rocks and ice passing in front of distant stars.

(male) We time or measure when the starlight disappears and where it reappears. The study of the outer solar system, or any portion of the solar system, tells you a little about where we came from.

(narrator) In Carson City, Nevada, students have access to professional equipment at the Davis Observatory.

They're using a camera that looks through the telescope which is more sensitive than your eye. You see the star disappearing?

(male) It's an opportunity to introduce kids to real science. We don't know what the answer will be. Things don't always run smoothly.

(female) I want to get into the astronomy field.

This has impacted what I want for my career.

It feels like we're doing something that's contributing to science more.

(narrator) The RECON team plans for the network to stretch from Washington State to Arizona. The aim: to bring together students, teachers, and knowledgeable amateur astronomers in each community. A project that is collecting data and doing analyses on these objects past Neptune that we don't have answers to yet. RECON is a chance for students to be part of the process of discovering new things about our solar system.

(narrator) This is not just a classroom exercise. Buie analyzes the data gathered by the students to calculate the sizes of the Kuiper Belt objects, which helps determine other characteristics like density and composition. They're doing authentic science. They're part of the process that will be publishable research.

(narrator) For these kids, it's a chance to learn science and to be scientists. From there, the sky's the limit.

With support from the National Science Foundation, astronomers Marc Buie and John Keller are involving citizen scientists from throughout the western United States to participate in the Research and Education Cooperative Occultation Network (RECON). The project has provided telescope equipment and training to 14 small western U.S. communities north and south of Reno, Nevada, where night skies are clear and dark. When RECON students look out at the night sky, they look way out to the Kuiper Belt, a ring of icy debris that litters the Solar System out beyond Neptune. The network is looking to determine the sizes of Kuiper Belt objects as they pass in front of distant stars. Part of the National Science Foundation Series “Science Nation.”