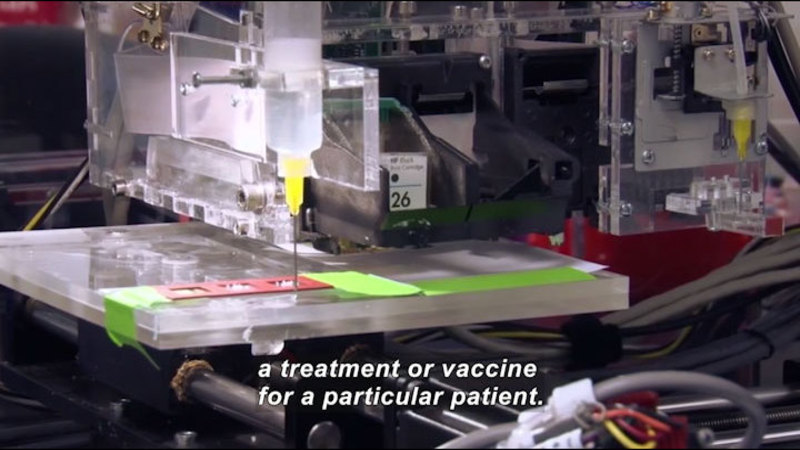 (Describer) In an animation, streams of light collide to create a globe filled with water. Title: Science Nation. A man watches a part of a machine move back-and-forth to weave silver strands.

(male narrator) It's 9 a.m., and the day's off to a loud start. This is a bio-loom. It is weaving a mesh that may help change the way doctors treat breast cancer. Current medicine is based on catch up.

You're always getting information after the fact.

(narrator) With support from the National Science Foundation, bioengineer Karen Burg and her colleagues at Clemson University are using the mesh, and other tools, to build scaffolds that mimic the three-dimensional structure of human tissue.

(female) The long-term goal is to personalize a treatment or vaccine for a particular patient.

(narrator) The 3-D structures are high-fidelity test systems. In the lab, Burg and her team can culture cancer cells in them, experimenting to see which treatments are the most effective.

(female) Depending on whether the person is a late-stage or early-stage cancer patient will make a very big difference in the type of three-dimensional structure that we would build.

(Describer) Gel comes out of a needle.

(narrator) Some of the bioengineered building blocks are as simple as a small pool of gel. While others are more sophisticated and can be cut in custom shapes and stacked. This machine is a bio-fabricator. It deposits the cancer cells at strategic locations inside the 3-D structure, just like tumors in human flesh.

(female) If you think of peanut butter, nuts suspended in paste, that's what we would like to do with building tissues, is to build tissues that have features within them. The nuts in peanut butter might be similar to tumor nodules.

(Describer) The man studies a monitor.

(narrator) Burg's lab buzzes with activity, including mentors who work with freshman and sophomore trainees from underrepresented student populations.

(female) We wanted to defy the usual, traditional way of bringing students into research, which is usually junior and senior year. We really wanted to whet their interest with a lower-key type of opportunity. In other words, get them in the labs, but not in a taxing way because it is their first or second year.

(narrator) Bioengineering tools to wage the war on cancer. That's a fight we all can take personally.

The researchers are building scaffolds that mimic the three dimensional structure of human tissue. They use a machine called a biofabricator to deposit cancer cells at strategic locations inside the 3D structures, just like tumors in human flesh. These structures are high fidelity test systems. Burg and her team can culture cancer cells in them, experimenting to see which treatments are the most effective, with the ultimate goal of personalizing a treatment or a vaccine for individual patients. Part of the National Science Foundation Series “Science Nation.”