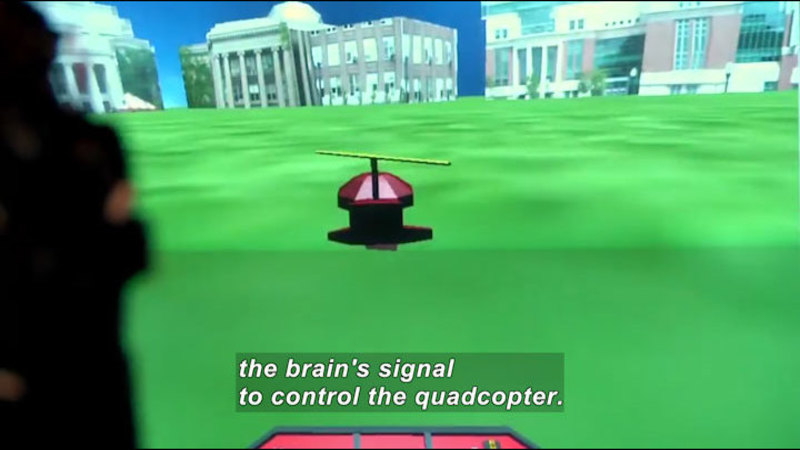 (Describer) In an animation, streams of light collide to create a globe filled with water. Title: Science Nation. A small helicopter with four propellers lifts off a floor, then moves horizontally.

(male narrator) A quadcopter flies through a balloon ring. Cool, but what's the big deal?

(Describer) A young man wears a cap covered in with electrodes.

Well look, Mom, no hands. There's no mouse or joystick here. It's all the power of thoughts.

and then decoded and sent through a Wi-Fi system to control this flying quadcopter.

(narrator) With support from the National Science Foundation, biomedical engineer Bin He and his team at the University of Minnesota created this brain-computer interface to help people with disabilities regain the ability to do everyday tasks.

(male) The goal is eventually to make this technology available to really help people stuck in a wheelchair with a variety of disabilities. Professor He is still testing out the system with college students. Before maneuvering the quadcopter for real, they train for 10 to 20 hours using a virtual aircraft flying over a computer-generated campus.

We insert two gels that help conduct signals from his brain.

(narrator) The interface is noninvasive-- no implants,

just an electroencephalography, or EEG, cap with 64 electrodes. When a participant thinks about a specific movement, neurons in the brain's motor cortex produce tiny electrical signals.

(male) The computer reads that digital signal and processes and extracts out the brain's signal to control the quadcopter. Participants develop their own motor imagination, or simple mind tricks, to help differentiate between moving the object up, down, right, and left.

That helps me focus one hand at a time to move the helicopter right or left.

(narrator) The interface is designed to help with everyday tasks like turning on a light switch. Professor He and his team chose the quadcopter for the testing phase to keep participants challenged and eager to succeed.

(male) The more fun and engaging, the better performance they can do.

(narrator) Whether it's a wounded veteran or a stroke patient, the aim is independence. Eventually, He says, this interface may help rewire brain circuits to bypass damaged areas.

(male) You want to phone someone, turn on the TV, switch the channel, surf the Internet, there's a huge societal and economic benefit to society eventually with this research.

(narrator) Harnessing brainpower to help people with disabilities do for themselves. A high-flying idea. Just think about it.

With support from the National Science Foundation, biomedical engineer Bin He and his team at the University of Minnesota have created a brain-computer interface with the goal of helping people with disabilities, such as paralysis, regain the ability to do everyday tasks. Currently, they’re testing out their system using a flying object known as a Quadcopter, which is controlled with someone’s thoughts. Part of the National Science Foundation Series “Science Nation.”