Science Nation: STEM Is on the Air at Youth Radio 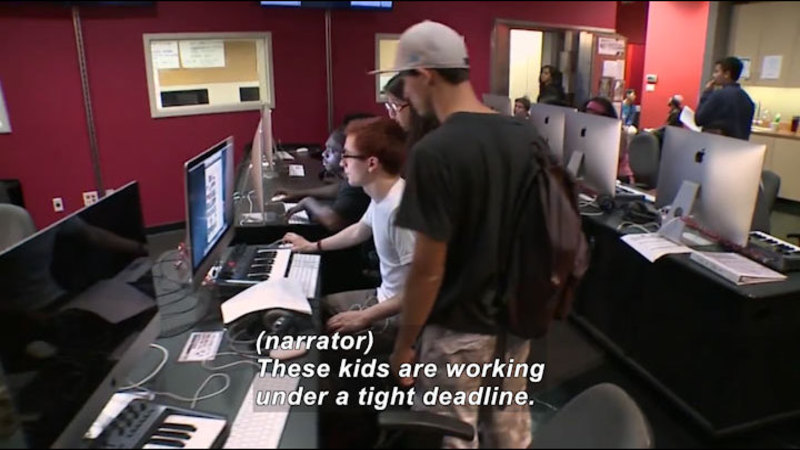 (Describer) In an animation, streams of light collide to create a globe filled with water. Title: Science Nation. A building has a mural of people along the bottom of it.

(male narrator) It's after school. This building in downtown Oakland is buzzing with activity. Teenagers are raring to go...learn. You just double-click on the actual--

(Describer) A young man is shown where to click in software.

(narrator) These kids are working under a tight deadline. In two hours they'll go live with a news radio show. Ever since I was little, I was born into it...

(Describer) Another young man reads in front of a microphone.

(narrator) They have to pick stories... Find out what's going on.

(female) Eighty-five percent of the young people are from low-income families and youth of color.

They come from the local schools nearby and spend their time here after school doing creative and technical work.

(narrator) With support from the National Science Foundation, producer and educator Lissa Soep and the team at Youth Radio are teaching kids how to investigate science stories like reporters and develop technology like programmers. Change one line of code in order to make this work. Oh, yeah, there you go.

called "Brains and Beakers" for National Geographic Online. Joi Morgan is getting some voice coaching on a story for NPR on the possible health effects of lipstick.

(Morgan) Concern about cancer as well as brain damage in children...

(female) Youth Radio has figured out, through developments over the last 20 years, how to engage kids. How to make science, technology, engineering, and math deeply relevant to them.

(narrator) In the basement, kids are learning to develop mobile apps to showcase stories they are working on.

We have access to Photoshop and Illustrator and tools to develop mobile and Web apps.

(narrator) Asha Richardson was once a student here. She and software engineer Kurt Collins teach kids like Donta Jackson. I think you should start styling the divs.

(male) Tablets and mobile devices are becoming so prevalent, we can't just be consumers anymore.

Ninety-five percent of users are consumers. The 5% that are creators add significant amounts to the economy. We're trying to teach these kids how to become that 5%.

(narrator) Back in the newsroom, it's showtime. Soep plans to make a Youth Radio tool kit available to students around the country.

(female) That will allow educators in different environments, in schools, in science museums, in community organizations, to take what we do and adapt and apply it in their own learning environment.

(narrator) Next time you switch on the radio news, pay attention. That reporter just might be a kid you know.

It’s after school, but this building in downtown Oakland, California is buzzing with enthusiastic teenagers raring to go and learn. On any given day, these kids are working under tight deadlines that would make many adults sweat. Welcome to Youth Radio, part of a youth media project funded by the National Science Foundation to engage underrepresented 14-24 year olds with training and hands-on experience in engineering, and the social, physical and biological sciences. Part of the National Science Foundation Series “Science Nation.”