Science Nation: Chemiscope to Catch Chemistry in the Act 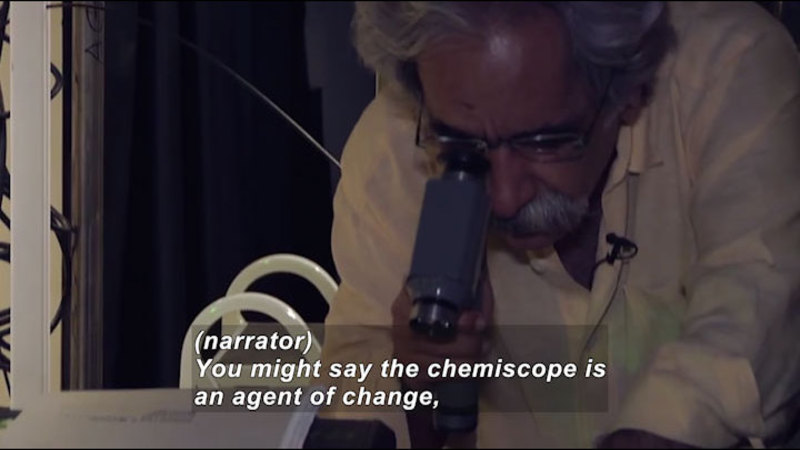 (Describer) In an animation, streams of light collide to create a globe filled with water. Title: Science Nation. Red and yellow circles shift around a blue center.

(male) This is seeing the inner workings of a molecule, what an electron actually does.

(male narrator) What the microscope did to unlock the secrets of biology, the chemiscope may do to revolutionize chemistry.

(male) We'll be able to actually see molecules react. We'll see the breaking of a bond. The chemiscope is designed to see not chemicals, but to see chemistry in action.

(narrator) With support from the National Science Foundation and its Center for Chemistry at the Space-Time Limit, chemist Ara Apkarian and his team at the University of California Irvine are inventing the chemiscope. Their ultimate goal is to see chemistry in the act, one molecule at a time.

(male) This is the scanning tunneling microscope.

(Describer) Equipment is stacked on different levels of platforms.

It's one mechanism of getting down to atomic resolution to be able to record the images in time. Then we use flashes of light that's generated by our lasers.

(narrator) A microscope magnifies what the eye sees. The chemiscope relies on ultra-fast lasers and tiny electrical currents to record images.

(male) It will be electrical signals picked up by-- that look like the old stylus of record players, that approaches a molecule, pokes it, and you look at the molecule's shape, but with tremendous resolution.

(narrator) They can record moving pictures of atoms and electrons inside a single molecule.

(male) The motion corresponds to a hula hoop curve.

(narrator) Molecules isolated in their own environments have individual personality. But what they can perform perfectly as soloists turns into a racket in an ensemble.

(male #2) They all behave differently.

You see them all, but with their own stories. Yeah, individuals. Each molecule is a little different.

(narrator) Seeing is the first step in manipulating individual molecules, a capability that will open the floodgates to new innovations in chemistry. We really would like to understand the secret of what makes a good catalyst or what makes a good photocell or what makes a good photovoltaic. That's where being able to see the single becomes crucial. Then we can arrange molecules as we wish. Go break bonds and attach atoms and bonds to molecules. That would be one of the ways that in the future the nanotechnology is going to go forward.

(narrator) You might say the chemiscope is an agent of change, and these bonds will be shaken and stirred.

What the microscope did to unlock the secrets of biology, the chemiscope is intended to do, to revolutionize chemistry. The ultimate goal is to observe chemistry in the act, to see the making and breaking of bonds in real-space and real-time. Part of the National Science Foundation Series “Science Nation.”