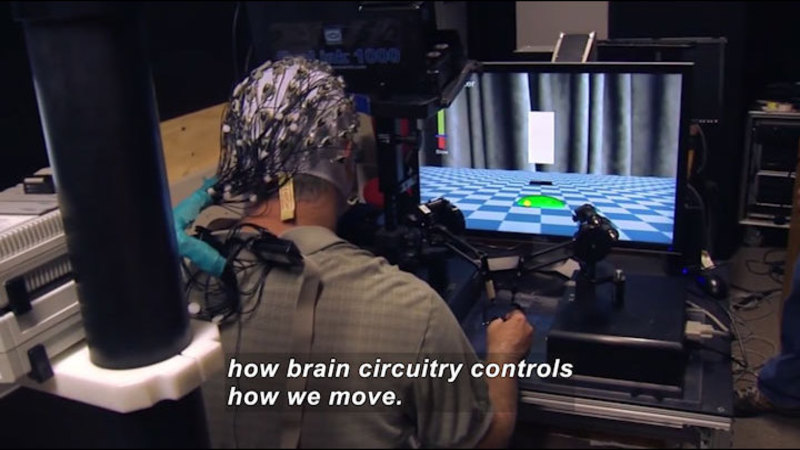 (Describer) In an animation, streams of light collide to create a globe filled with water. Title: Science Nation. Electrodes cover a thin swimming cap on a man's head.

(male narrator) For Jim Campbell, who has Parkinson's disease, it's time to get gooey. Before he can start a computer-based test to monitor his neural activity, dozens of sensors must be activated in this cap using a conductive gel.

(male) Parkinson's disease is not just about one impaired brain location, it's the whole body.

We look at the problems holistically, combine science and clinical aspects, but with engineering approaches for technology.

(narrator) With support from the National Science Foundation's Emerging Frontiers of Research and Innovation Program, University of California San Diego bioengineer Gert Cauwenberghs and his team are working to understand how brain circuitry controls how we move.

(Describer) Campbell operates controls that move dots on a computer.

The goal: develop new technologies to help patients like Campbell navigate the world on their own. We'd like to go one step further and use advanced technology, but in a means that is more proactive in helping the brain get around problems-- in this case Parkinson's disease-- by working with the brain's natural elasticity in the wiring connections between neurons in different ways.

(male) Understanding what the patterns are, in terms of what's amenable to treatment and what isn't, has implications for therapy and rehabilitation for patients and for understanding the nature of these brain circuits that are dysfunctional already.

(narrator) They're already seeing progress toward making these tests simpler and faster.

(Describer) Small crown shapes are inside a cap of soft straps.

(male) This uses Bluetooth for all the data connection.

We're also trying to get from the sensor level, the level of the little currents we're recording here, down to the level of much smaller currents inside your brain being generated by neurons.

(narrator) Using motion capture and virtual reality technology, researchers are learning more about the relationship between neural activity and the human body in motion. That's key to developing devices that will help in day-to-day activities. It's not about advancing knowledge in an ivory tower, it's about making things work in the real world.

(narrator) Demystifying how the brain and body work together will lead to a new generation of activity sensors and smarter prosthetics to improve speech and balance. Campbell is glad to contribute. I get satisfaction that I'm helping them. I'm hoping eventually they'll help me.

(narrator) Decoding the complexities of the human brain: one of the grand engineering challenges of the 21st century.

With support from the National Science Foundation's (NSF) Emerging Frontiers of Research and Innovation (EFRI) program, bioengineer Gert Cauwenberghs, of the Jacobs School of Engineering and the Institute for Neural Computation at the University of California (UC), San Diego, and his colleagues are working to understand how brain circuitry controls how we move. The goal is to develop new technologies to help patients with Parkinson's disease and other debilitating medical conditions navigate the world on their own. Part of the National Science Foundation Series “Science Nation.”