Science Nation: Engineers Are Schooling Themselves on Fish Maneuvers 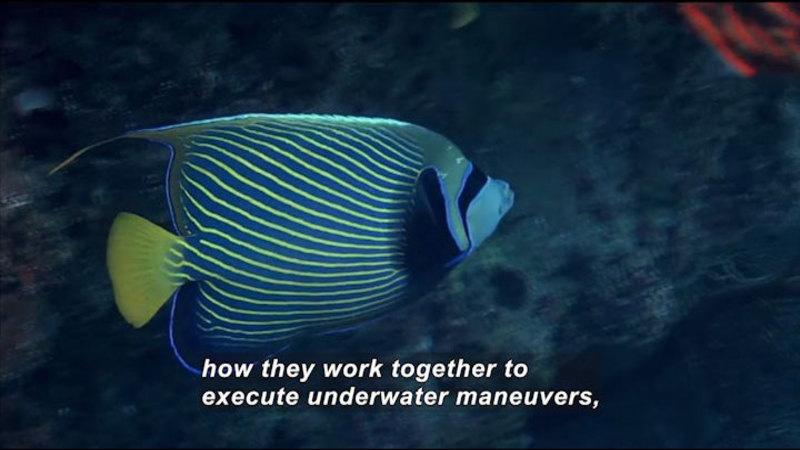 (male narrator) You might call them fine-tuned swimming machines, veritable masters of underwater propulsion. Fish can accelerate quickly, maneuver through tight spaces, hover for long periods, and turn on a dime.

(male) It's because of this complex muscular system that comprises more than 50% of their body mass.

(narrator) With support from the National Science Foundation, aerospace engineer Michael Philen, and his team at Virginia Tech, want to understand the biomechanics of fish locomotion. They are looking at fish muscles and nerves on a microscopic level to better understand how they work together to execute underwater maneuvers, like darting around in perfectly synchronized schools. It would be nice to develop a robotic fish, using this technology, that would swim efficiently at different swimming speeds.

(Describer) A thin white strip has black speckles on one side.

We speckle our fins and, using the digital cameras, we can track these speckles. Using high-speed cameras, Philen and his team track how plastic fins of different shapes cut through the water.

(Describer) The strip is waved in a tank.

(male) Fish have two-gear systems. They have red muscle fibers to swim efficiently, slow. To get away fast or an escape maneuver, they can use their white muscles. About 90% of their muscle mass is the white fibers.

(narrator) A fish is like a fine-tuned race car; styling and design determine performance.

(male) Sharks have a very distinct fin, which allows them to swim fast. Shapes and sizes of fish differ for a reason. It affects their efficiency, maneuverability, and speed. We're finding, if you want to swim faster, you want a stiffer fin. But to swim efficiently at a slower speed, you want your fin to become more flexible or compliant.

(Describer) A large model of a fish's back tail is moved.

(narrator) Philen's ultimate goal is to develop smart materials that can adapt to the environment. For example, a submersible that has flexible fins when it needs to maneuver and rigid fins for speed.

(male) Some fins, we've looked at using smart materials to actuate the fins and essentially control the surface or shape of the fins.

(narrator) Other smart materials in development: bioengineered hair, modeled after hair cell sensors that form a lateral line on the side of a fish and allow detection of minute changes in water flow to locate prey or stay in sync with the school. They can almost take a picture underwater using these hair cell sensors.

With support from the National Science Foundation, aerospace engineer Michael Philen and his team at Virginia Tech are investigating the biomechanics of fish locomotion, in hopes of contributing to the next generation of robotic fish and underwater submersibles. They’re studying how fish use their muscles to swim efficiently and execute underwater maneuvers, such as darting around in perfectly synchronized schools. They’re also developing new smart materials, such as a bioengineered hair that is modeled after the hair cell sensors on the side of fish that allow it to detect minute changes in water flow. Part of the National Science Foundation Series “Science Nation.”