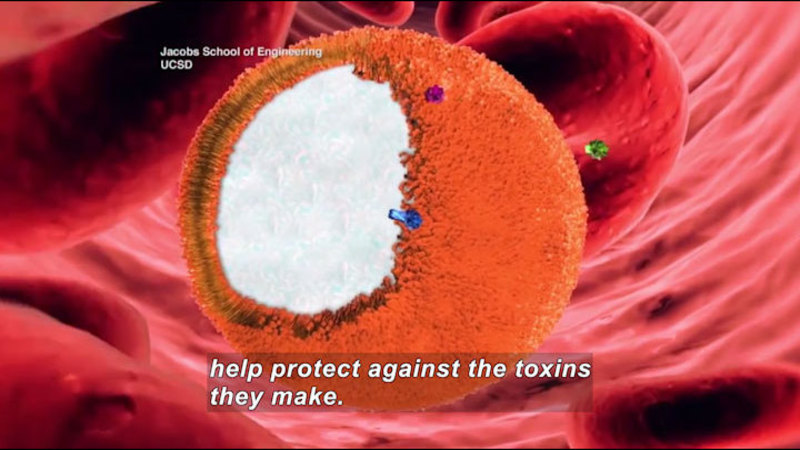 (Describer) In an animation, streams of light collide to create a globe filled with water. Title: Science Nation. A surgical team conducts an operation.

(male narrator) When tackling a disease or infection, a doctor's first instinct may be to find it and destroy it. But instead, how about using a custom engineered nanoparticle to soak it up like a sponge? With many treatments, we add something to the body to destroy the bugs or kill the cancer cell. This technology works in the opposite way.

(narrator) With support from the National Science Foundation, nanoengineer Liangfang Zhang, and his team at the University of California San Diego, created the nanosponge to combat drug-resistant infections like MRSA. Instead of targeting the bugs, these nanoparticles help protect against the toxins they make. They can even absorb venom from snake bites.

(Describer) In an animation, a sphere moves through a bloodstream.

(male) Our team came up with this idea of camouflaging this nanoparticle with a red blood cell member. It's more like a natural toxin decoy.

(narrator) And these stealthy nanosponges should work with any type of poison or infection that attacks the cellular membranes.

(male) For this nanosponge technology, it doesn't care how the toxin looks, it attacks the working mechanism of the toxin.

(Describer) The sphere develops a thick orange coating, and different particles stick to it.

When this nanosponge is circulating in the bloodstream and absorbs these toxins, after it's fully loaded with toxin, they will just go to the liver. Now the liver cells can safely take up the entire nanosponge.

(narrator) One red blood cell can be used to create cloaks for more than 3,000 individual nanosponges.

(male #2) We start out with whole blood and then purify the membrane component of these red blood cells.

Then we're going to create these tiny little particles out of a very biocompatible, biodegradable polymer. We're then going to fuse them together, thereby forming the resulting nanosponge.

(Describer) Material is injected into a small vial.

(Zhang) We started from the whole blood...

(narrator) Zhang's team has been working with mice and has chalked up a nearly 100% success rate against staph infections with the nanosponges. Human clinical trials are the next step. Zhang is working closely with physicians and students at Moores Cancer Center on this nano-approch to medicine, refining an idea that sounded like science fiction not so long ago.

(male #3) Doctor Zhang is incredibly innovative. That's the beauty of science. Sometimes these wild, brainstorming sessions really do turn into unique and high-impact innovations for medicine.

When someone's getting healthier faster, that's what matters.

(narrator) Tackling disease with a nano-size secret agent. Just take a minute and absorb that idea.

With support from the National Science Foundation, Liangfang Zhang and his team at UC-San Diego have created a nanosponge to combat drug-resistant infections, such as those caused by Methicillin-resistant Staphylococcus aureus (MRSA). The nanosponge, made from biocompatible, biodegradable polymer nanoparticles, is camouflaged with a red blood cell membrane. It circulates in the bloodstream, absorbing the toxins produced by infection. Once the nanosponges are fully loaded with toxins, they are safely disposed of by the liver. They are designed to work with any type of infection or poison that attacks the cellular membrane. Part of the National Science Foundation Series “Science Nation.”