Science Nation: No Leader? Now What? 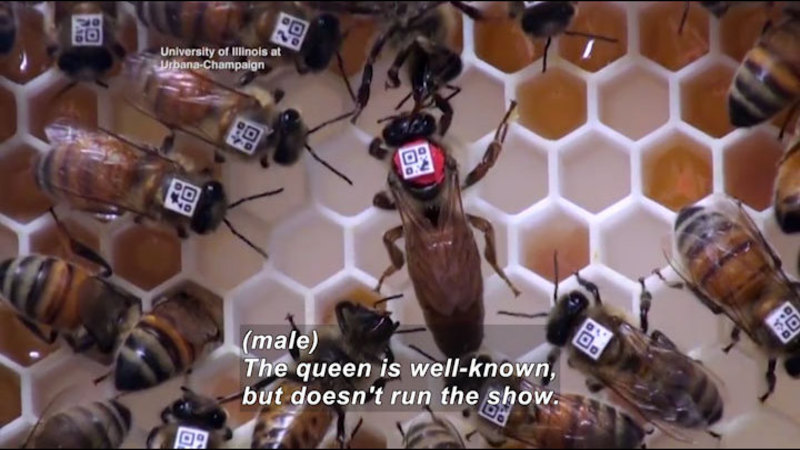 (Describer) In an animation, streams of light collide to create a globe filled with water. Title: Science Nation. Dozens of bees stand and crawl over boxes.

(male narrator) A beehive is like a stock market. Both involve huge numbers of transactions.

It's the collective activities of many individuals that together give rise to the behavior of the market.

(narrator) And like at the stock exchange, no one individual is in charge.

(male) The queen is well-known, but doesn't run the show. Her job is to lay eggs.

(Describer) A bee is held with tweezers as a black and white tag is stuck to its back.

(narrator) With support from the National Science Foundation, entomologist Gene Robinson and mechanical engineer Harry Dankowicz at the University of Illinois at Urbana-Champaign... and psychologist Whitney Taybor at the University of Connecticut are studying how coordination emerges in these leaderless complex systems.

We have to see the connection between individual behavior and overall behavior.

(narrator) A beehive is a model system to study how complex human systems work.

(male) A bee colony, just like any society, is constantly faced with challenges and new situations.

(Describer) Each wears a tag.

(male) You see tens of thousands of individuals bumping into each other, touching their antennae, possibly exchanging food or some other kind of interaction.

(narrator) Older bees forage for food. In the hive, they emit chemical signals that prevent younger bees from maturing. When there are fewer older bees, the absence of the chemical signals causes the younger bees to mature faster. Just one of many types of asynchronous communication that go on in a beehive.

Asynchronous communication goes on in all sorts of different contexts: in computers, in the brain. The brain has billions of neurons that are communicating in ways we have yet to figure out.

(narrator) A challenge for both bees and humans is deciding who should do what when no one is in charge.

(Describer) A few people each play a simple computer game based on directing a circle to squares in a diamond pattern.

This is a group coordination game that you're gonna be playing with others in the room.

(narrator) Since humans use language to communicate, Tabor's group is studying how people create communication systems for performing coordinated tasks.

(male) They don't talk to each other.

We're interested in a way a kind of language-like system develops in this context of doing a joint task with other people.

(Describer) “You Won!” appears on a screen.

(narrator) Dankowicz's team maps both bee and human interactions. We want to see how complex systems adapt to challenges, to circumstances that enable them to be robust, to not fail.

(narrator) Dankowicz says first they must determine the patterns of coordination in these complex systems. The next challenge will be figuring out how to keep systems like these humming.

Queen Bees are not actually in charge of anything. Their job is to lay eggs, not to rule the hive. With support from the National Science Foundation, entomologist Gene Robinson and mechanical engineer Harry Dankowicz at the University of Illinois, Urbana-Champaign have teamed up with psychologist Whitney Tabor at the University of Connecticut to study how coordination emerges in leaderless complex societies, such as a bee hive. Part of the National Science Foundation Series “Science Nation.”