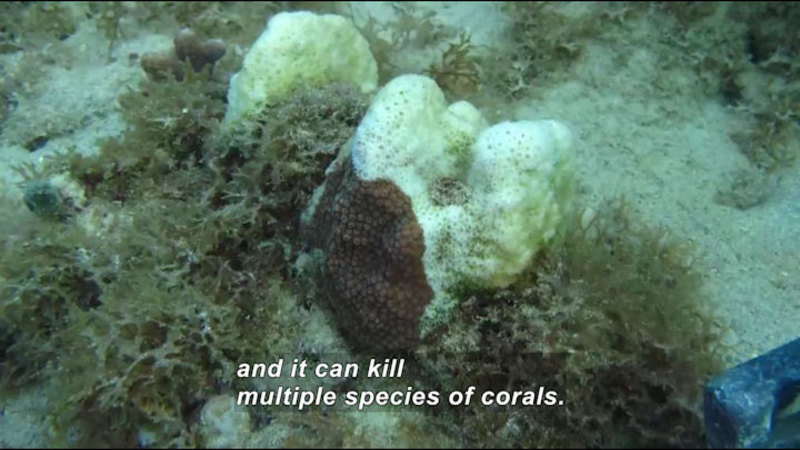 (Describer) In an animation, streams of light collide to create a globe filled with water. Title: Science Nation. Underwater, purple cactus-like formations are covered with bumps.

(male narrator) Coral--hard to imagine the oceans without it. It's a living, breathing animal, and countless sea creatures call the coral reef's nooks and crannies home.

(female) It's one of the most basic, structured animals. It also is composed of algae that live inside itself. These algae are responsible for providing energy from the sunlight. Essentially, it's both an animal and a plant.

(narrator) But there's big trouble brewing on the home front.

Unfortunately, for the last 50 years corals have suffered major declines worldwide. In the Caribbean, they've gone from being about 60% of the bottom of the ocean to about 5%. The problem is largely due to the impacts of human population growth and global industrialization. Coral viruses also play a role.

(Describer) Thurber looks into a tank with a man.

This one has a nasty disease.

(narrator) With support from the National Science Foundation, microbiologist Rebecca Vega Thurber and her team at Oregon State University are diving in to study the viruses that affect coral.

(female) We go out to the environment, collect corals, and analyze the DNA exclusively. We really want to understand what's driving those declines in coral reef cover.

(narrator) Vega Thurber wants to learn more about the role of viruses in coral's biology. Some are apparently present even in healthy coral, similar to the chicken pox or herpes virus in humans.

(female) Like in humans, almost all corals have herpes viruses. It was quite a shock. We also found other viruses. One type of virus which are called nucleocytoplasmic large DNA viruses, or large viruses, also infect corals. And we think they're infecting those symbiotic algae that live inside the corals.

(narrator) Another bad guy, white plague, is making trouble in the Caribbean.

(female) It causes the destruction of large reefs very quickly, and it can kill multiple species of corals.

(Describer) Some coral has a white coating on it.

(narrator) After hurricanes, researchers see outbreaks of white plague in coral fragments broken up by the storm.

(female) We assume it's stress. When we get stressed out at work, we might get a cold sore or outbreak of flu. It's very likely that when corals experience stress, that they also can get outbreaks of viral infection.

(Describer) A tractor is driven through a field.

(narrator) Vega Thurber says one human-induced stressor may be fertilizer components, like nitrate and phosphate, that run off into the water.

(female) It can alter the community of bacteria, and it can lead to coral disease.

(narrator) The problems run deep. Vega Thurber's goal is to reveal more about the connection between coral viruses and reef decline while these marine treasures still have a chance to bounce back.

Corals are important ecosystem engineers, providing habitat and nutrient recycling to tropical reefs. However, coral species’ richness and abundance are in decline worldwide, due in large part to the impacts from global industrialization and human population growth. Coral disease is a major contributor to this decline of tropical reefs, and therefore, investigations into the causes of and remedies to these diseases are of critical importance. Part of the National Science Foundation Series “Science Nation.”