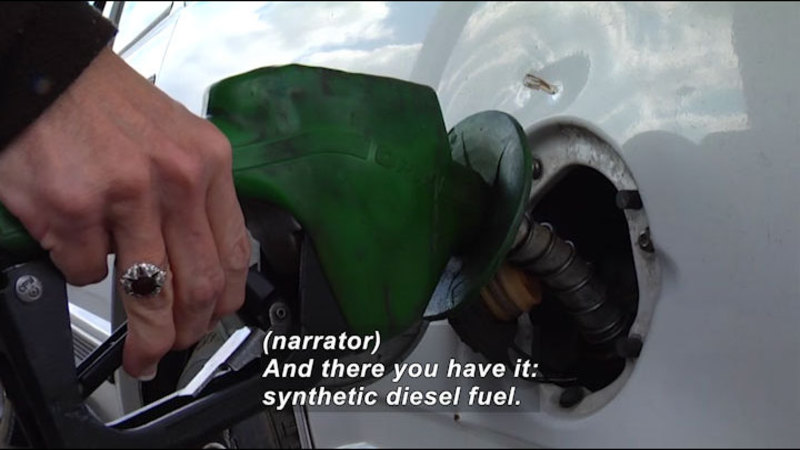 (male narrator) Diesel, we know it best as the fuel that does heavy lifting. Typically, diesel is made from crude oil.

(Describer) A diagram is shown.

But using a process called Fischer-Tropsch, or FT, scientists can make high-grade diesel from coal, natural gas, plants, or even agricultural waste. Just about any carbon source is an option.

The Fischer-Tropsch process, interestingly, was invented in Germany in World War II as a way to get around a oil embargo to the Nazis. The problem is FT diesel is expensive to make and generates lots of waste-- that is, until now. With support from the National Science Foundation and its Center for Enabling New Technologies Through Catalysis, chemists around the country are working together to improve the cost and energy efficiency of alternative fuels like this.

We bring teams of investigators together to work on different chemical processes. In this case producing diesel fuel.

(Describer) A man draws a chemical process on a whiteboard as two others watch.

(narrator) Chemist Richard Schrock from MIT, Maurice Brookhart from the University of North Carolina, and Alan Goldman from Rutgers University have developed catalysts, or chemical converters, that work together to turn a far higher amount of carbon-sourced material into a high-grade diesel.

It's a dual catalyst process. We use two catalysts.

(narrator) The FT process converts carbon monoxide and hydrogen into liquid hydrocarbons. Some of the long chains in that hydrocarbon soup can be refined as diesel fuel. But a lot of shorter chains end up discarded. What if those shorter chains could be joined to make more diesel?

Brook and I have been working on catalysts. One of the catalysts removes hydrogen from the hydrocarbon chains.

(narrator) That's the first step. Then a second catalyst, which garnered Schrock a Nobel Prize, chemically links together hydrocarbon chains.

(male) We need the bigger chains, and we don't have enough.

So we take the plentiful small pieces and create the big ones. Then the catalyst that Brook and I have puts back the hydrogen. And at the end of it, you've rearranged the hydrocarbon chains.

(narrator) And there you have it: synthetic diesel fuel. Schrock says manipulating hydrocarbons like this is still expensive, but it opens up endless possibilities. Imagine making not just diesel from plants, but jet fuel and even plastic. Plants are gonna be around, but petroleum is not. The hope is that the technology we're creating can work its way into industry and then be used in the industrial process.

(narrator) Clearing the way for a cleaner, more efficient way to keep these engines running on down the road.

Typically, diesel fuel is made from crude oil, but scientists can make high-grade diesel from coal, natural gas, plants, or even agricultural waste, using a process called Fischer–Tropsch (FT). FT Diesel is the ideal liquid transportation fuel for automobiles, trucks, and jets. It’s much cleaner burning than conventional diesel, and much more energy-efficient than gasoline. But, FT Diesel is expensive to make and generates lots of waste. With support from the National Science Foundation and its Center for Enabling New Technologies through Catalysis (CENTC), chemists around the United States are working together to improve the cost and energy efficiency of alternative fuels. Part of the National Science Foundation Series “Science Nation.”