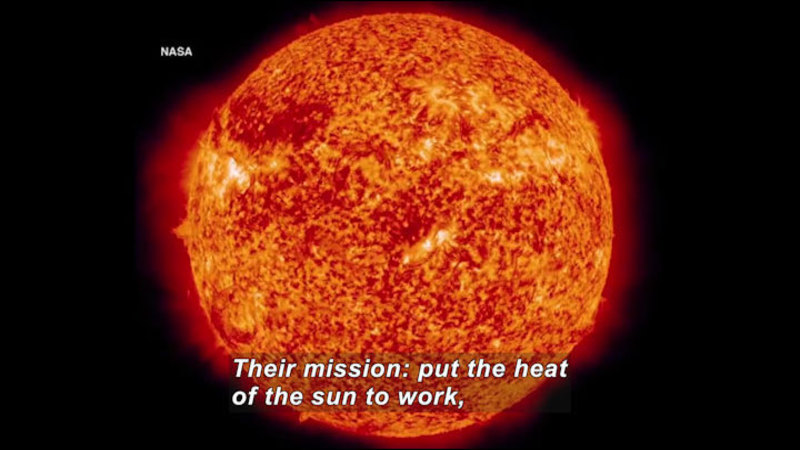 (Describer) In an animation, streams of light collide to create a globe filled with water. Title: Science Nation. Someone puts a nozzle into a car's gas tank.

(male narrator) Fill 'er up...with sunlight? More energy from our sun hits the earth in an hour than the planet consumes in a year. The question is, how can we put all that sunshine to work making useable fuel?

(female) And in that one spot, we had the equivalent

of 3,000 suns. So we're able to get exceedingly high temperatures.

(narrator) With support from the National Science Foundation's Emerging Frontiers in Research and Innovation, chemical engineer Sossina Haile at Cal Tech and mechanical engineer Jane Davidson at the University of Minnesota are working to expand the nations' renewable energy storage capacity. Their mission: put the heat of the sun to work, creating replenishable fuels not drilled from the ground.

We're collecting enough sunlight to create high temperature. So, collect enough to get high heat, and use that to drive chemical reactions, breaking apart the water or carbon dioxide molecule in order to make a fuel like hydrogen or carbon monoxide.

(female) There are seven concentrators. In the middle of each one of those is a 7,000 watt light bulb.

(narrator) This is an indoor solar simulator. It can generate the rays. Davidson and her team gave us a demo, dialing it to over 1,500 degrees Celsius, burning a hole in this brick. Experiments like this are helping Davidson and Haile learn how to harness real sunlight to make synthetic fuels.

(female) There's smoke coming off. There's already a hole melting out the front. That was a success.

(Describer) Another hole has been burned through a brick.

(narrator) They call it sun gas, and it's tank-ready.

(female) One of the real advantages of solar fuels is that it powers the same cars we drive today, you can use it for long-distance trucks, you can make airplane fuels. At the gas station, you can get exactly the same product, but made from sunlight, water, and CO2.

(narrator) Sun stations on the corner are years away. Engineers are still improving the efficiency of the process. But the catalyst used to split water and CO2

is an inexpensive metal oxide called ceria. It can create fuels for cars, power plants, even your laptop. I like to say that I'm fuel agnostic. If you are a technologist that would like hydrogen, we can make hydrogen. If you'd like syngas, the precursor to liquid fuels, a mixture of hydrogen and CO, we can also deliver that. We'll deliver any fuel desired using sunlight as the input.

More energy from the sun hits the Earth in one hour than is consumed on the planet in a whole year. Caltech chemical engineer Sossina Haile and University of Minnesota mechanical engineer Jane Davidson are working to expand the nation’s renewable energy storage capacity. Their mission is to put the heat of the sun to work creating renewable fuels from sources that don’t need to be drilled out of the ground. Part of the National Science Foundation Series “Science Nation.”