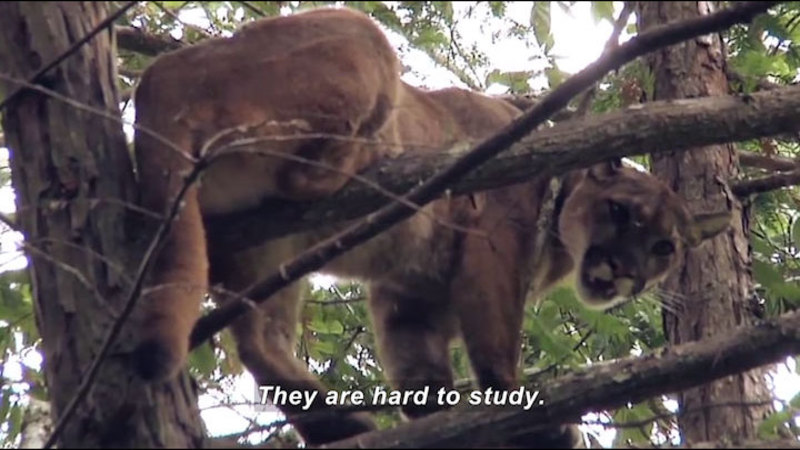 (Describer) In an animation, streams of light collide to create a globe filled with water. Title: Science Nation. A dog is let out of a truck to run through a forest, joining another to look up at a mountain lion high in a tree.

(male narrator) It takes a hound's nose to sniff out mountain lions in the wilds of Northern California.

(male) They're very secretive. They're nocturnal. They are hard to study. It's partly for that reason that I find them so intriguing.

(Describer) It's shot with a dart.

(narrator) After tranquilizing the big cat with a dart, wildlife ecologist Chris Wilmers and colleagues take hair and blood samples then attach this collar. But this is no mere GPS tracker. It's a high-tech electronic diary, recording the animal's location, behavior, and physiology in unprecedented detail. This, up here, has the GPS and all the technology, and then battery power is here. We can communicate with the collars, so we can get data remotely.

(narrator) With support from the National Science Foundation, Wilmers and a team at the University of California Santa Cruz, built this collar to track the cat's movements, metabolism, and habitat preferences.

(male) It will let us understand details about their biology: how they make a living, how they get enough calories to sustain themselves, and reproduce and have young.

(male) Here is our more recent prototype. You'll notice they're getting smaller.

(narrator) Computer engineer Gabriel Elkaim designs sensors for the college using technology he's developed for autonomous and unmanned aerial vehicles. We're trying to get something small, robust, and power aware, so that it turns on and off different pieces as appropriate. We try to determine, in real time, what the animal is doing, whether he is trotting, running, walking, pouncing, stalking. Another team member, biologist Terrie Williams, works with dolphins, studying how animals in captivity use energy. She says tests on captive mountain lions could shed light on their metabolic needs, and that could head off deadly confrontations.

(Describer) She sits by a dolphin tank.

(female) Maybe we'll get to a point of saying, "I can predict when you shouldn't have "sheep or goats out, because I know "this cat is hungry at this time, and therefore, let's prevent the problem." That's the power of this technology.

(Describer) White and blue dots are on a map.

(male) Looking out here, in the blue, is the GPS locations of 11F. This is a young female.

(narrator) Wilmers works with state transportation planners to identify range boundaries and select areas for safe crossing, such as these,

to give mountain lions and other wildlife, near urban areas, safe passage. Keeping close tabs on these felines will hopefully lead to fewer...catastrophes.

With support from the National Science Foundation, wildlife ecologist Chris Wilmers and his team developed a collar to help them learn more about the behavior, metabolism and habitat preferences of mountain lions. In addition to its location, the animal’s behavior and physiology are recorded in unprecedented detail. They’re learning more about how the cats respond to different stimuli, such as climate, and interactions with other animals, and changes in the landscape created by development. Part of the National Science Foundation Series “Science Nation.”