Science Nation: How Did Life on Earth Begin? 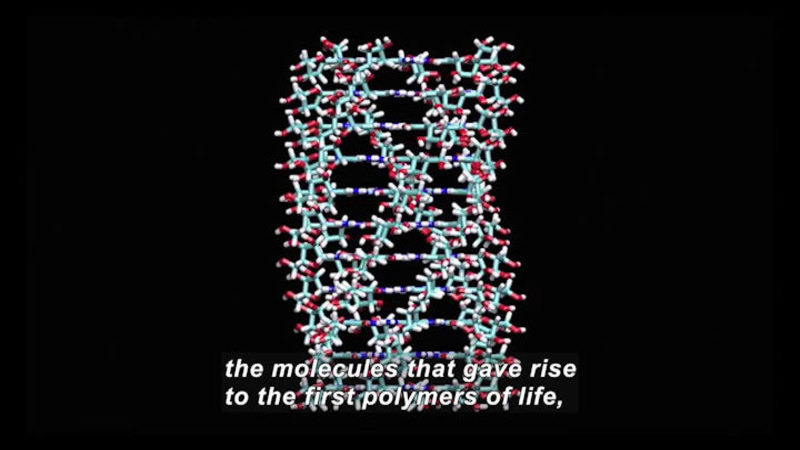 (Describer) In an animation, streams of light collide to create a globe filled with water. Title: Science Nation. The sun appears over a global horizon.

(male narrator) It's one of the most profound questions: how did life on earth begin?

(male) When I got into science, I wanted to work on a big question, a question that would be interesting all of my life. The more I thought about origin of life, the more I thought, "This really fits the bill."

(narrator) With support from the National Science Foundation, Georgia Tech biochemist Nicholas Hud and a team at the Center for Chemical Evolution are working to chip away at the question. They're homing in on how chain-like chemicals called polymers first came together and evolved 3.5 to 4 billion years ago.

(male) We're thinking that on the early earth, the molecules that gave rise to the first polymers of life, RNA and DNA, would have actually started by small molecules interacting with each other and forming very ordered structures.

(narrator) In other words, they assembled themselves.

(male) In the center of this model are what we call the base pairs.

(narrator) Hud's focus is the RNA molecule, a chemical sibling to the better-known DNA.

RNA does the genetic heavy lifting in a cell, translating the information stored in DNA into materials needed to build a living organism. Some researchers believe that RNA, or an RNA-like polymer, was the first molecule of life.

(Describer) Liquid is stirred in a flask.

(male) So we can then select from this chemical inventory the molecules that might have been important for getting something like life kick-started.

(narrator) So far, no labs working on chemical evolution has been able to coax RNA to self-assemble in the lab. But Hud and his team have identified a couple of molecules that make a structure that almost looks like RNA.

(narrator) Hud says these may be the chemical ancestors of RNA as we know it today.

(male) If we take the components that we have in RNA today and we change them, sometimes just by one or two atoms, we find they react together much more easily. And they seemingly put us on the road towards making what we might call a proto-RNA polymer.

(narrator) Putting chemistry to work, sleuthing out the origins of life. A bit like genealogy, perhaps, but going way, way back on the family tree.

With support from the National Science Foundation (NSF) and National Aeronautics and Space Administration (NASA), Georgia Tech biochemist Nicholas Hud and a team at the Center for Chemical Evolution (CCE) are working to chip away at how life on earth began. They are homing in on how chain-like chemicals called polymers first came together and evolved three-and-a-half to four billion years ago. Part of the National Science Foundation Series “Science Nation.”