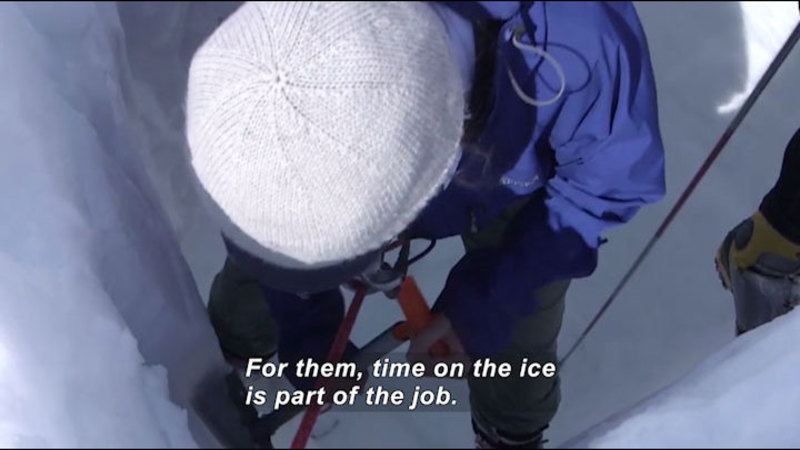 (Describer) In an animation, streams of light collide to create a globe filled with water. Title: Science Nation. A plane flies over jagged mountains and snow.

(male narrator) Tighten your seatbelt; this runway is made of ice.

Some come for a photo op,

(Describer) A couple other people ski.

others for backcountry skiing.

(Describer) Equipment is pulled on a sled.

But this is no vacation for University of Maine paleoclimatologist Karl Kreutz and his team. For them, time on the ice is part of the job. Sample 2 should come from a depth of 50 centimeters, please.

(Describer) Workers take samples in a hole that goes up to their heads.

(narrator) With support from the National Science Foundation, Kreutz and company are reconstructing the climate history of this area over the last 1,000 years.

(male) We are interested in looking at the relationship between temperature and precipitation rate and the response of glaciers in this area to those changes.

(narrator) In 2013, the team drilled ice cores high atop Denali's Mount Hunter. By carefully analyzing ice layers inside the cores, the team has compiled a record of temperature change in the Alaska Range over the last millennium.

(Describer) Another sample is pulled up.

(male) We think we see an increase in the rate of melting in the past decades. So, from roughly 1930 to today, it looked like there was more melt layers, or warmer summers, in those few decades than the time prior to that.

(narrator) This tracks with what scientists have observed in recent years. Most of the world's mountain glaciers, including nearly all in Alaska, are retreating.

The vast majority of glacier ice on our planet lies in Greenland and Antarctica.

It is no surprise that's where most of the attention and scientific effort is. People who come to these mountains and glaciers say the ice here shouldn't be overlooked. Assuming the melting trend continues, and Kreutz thinks it will, these Alpine glaciers will make a significant contribution to global sea level rise in the coming decades.

(male) The estimate now is roughly a meter of sea level rise is locked up as ice in mountain and valley glacier systems.

(Describer) A man on cross-country skis pulls the small sled of equipment.

(narrator) This season, the team turned its focus to the roof. Geophysicist Seth Campbell is using ground-penetrating radar to direct pulses of energy down through the ice to map its depth. Until now, scientists have had to guess how much ice is here. We don't have good estimates of total ice volume or ice depth. There's 60 to 100 thousand glaciers in Alaska. Of that, maybe 10 have been studied significantly.

(Describer) Another hole is dug.

(narrator) The team also uses snow pits and radar to estimate the prior year's winter snow accumulation. They dig through the previous year's snow deposit to take samples for study and validate the radar data.

(male) By digging a pit and seeing how much snow fell this past year and comparing the observation to the radar signal, we have more confidence.

(narrator) With more time spent on the ice, their confidence rises. This team is all about getting the facts nailed down cold. For Science Nation, I'm Miles O'Brien.

Welcome to Ruth Glacier, deep inside Alaska’s Denali National Park and Preserve. Some of the visitors are here for recreational activities, such as backcountry skiing, but this is no vacation for University of Maine paleoclimatologist Karl Kreutz and his team. For them, time on the ice is all part of the job. With support from the National Science Foundation, the scientists are working to reconstruct the climate history of this area over the last thousand years. Part of the National Science Foundation Series “Science Nation.”