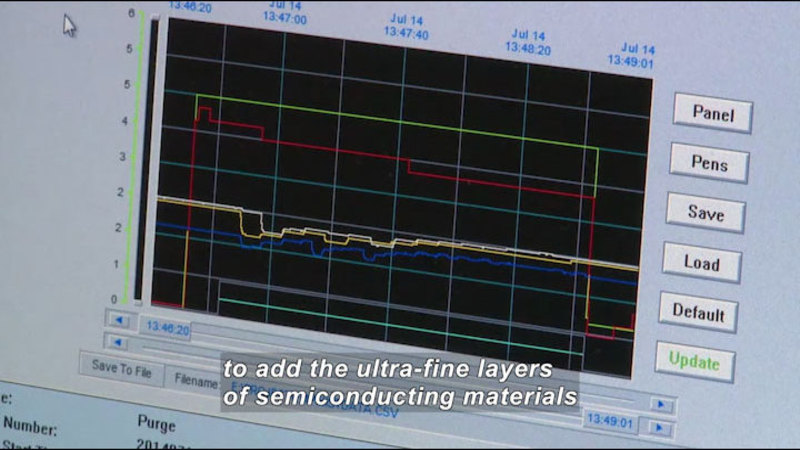 (Describer) In an animation, streams of light collide to create a globe filled with water. Title: Science Nation. People work in a lab, where a beaker is shaken on a platform.

(narrator) The changes brewing inside this lab could make that smartphone you carry smarter, lighter, and most definitely greener. It's one of many devices getting an electronic makeover at the Center for Sustainable Materials Chemistry. We don't want to walk around with a computer or cell phone that operated with 10-year-old technology. We're always looking for more and more capabilities.

(narrator) With support from the National Science Foundation, chemist Doug Keszler and his team at Oregon State University are throwing out all the old chemistry books and developing the next generation of electronic circuits. They're starting with the basic computer chip. This is a standard silicon wafer that would be used

(narrator) Keszler and company are looking to reimagine the chip recipe, to manufacture them using metal oxides instead of bulky carbon compounds to put more transistors on a chip. Not only is the process cleaner, these next generation circuits will be faster and cheaper.

(Describer) A small flat square is spun around.

(male) All the electronics industry is based on etching, which means we have a material that we start with, and we simply keep removing materials to get the performance in an integrated circuit or device that we want. We're trying to look at more additive ways to do that, much more efficiently print the devices, and do that with safe materials.

(Describer) A wafer is placed in a machine.

This particular instrument is a nFog system. It's a way to make thin films, potentially, over very large areas.

(narrator) Keszler says they're finding cleaner ways to add the ultra-fine layers of semiconducting materials to electronic surfaces. Here they layer films of material in a fine mist of water that later evaporates away. The coated surfaces they create can be used in a variety of products, from solar panels to electronic sensors in cars.

(Describer) A car is driven on a street.

(female) Technology in our company all came out of the center.

(narrator) Companies like Inpria are already using processes developed at the center.

People thought we were crazy, but now they've realized that this new platform is very much exactly what they need to push the envelope and push their products.

(narrator) For upgrades and innovations in our gadgets and devices to stay at a galloping pace, processing power needs to keep getting faster and chips need to keep getting smaller. This team is about making that happen, all while keeping it clean.

With support from the National Science Foundation, Center Director Doug Keszler and his team in the College of Science at Oregon State University are developing the next generation of electronic circuits, starting with the basic computer chip. In the manufacturing process, they want to replace bulky carbon compounds with metal oxides, in order to put more transistors onto a chip. The new process would be cleaner, faster and cheaper. Part of the National Science Foundation Series “Science Nation.”