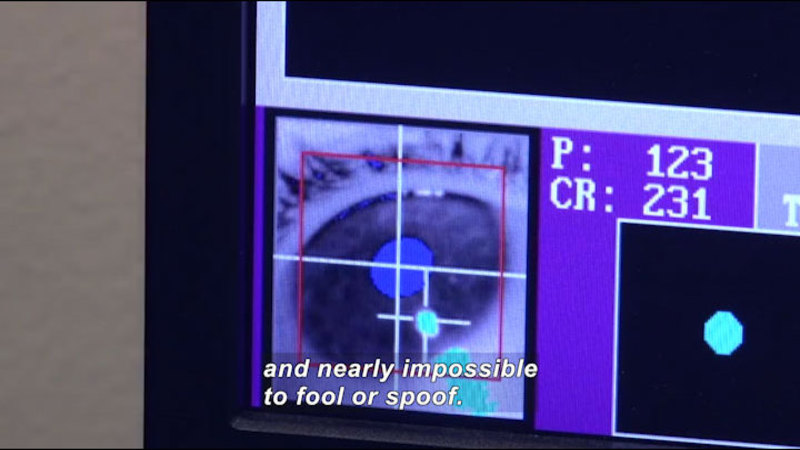 (Describer) In an animation, streams of light collide to create a globe filled with water. Title: Science Nation. Fingers type on a keyboard.

(male narrator) Tired of fumbling for computer passwords? Weary of worrying that hackers might steal your identity? Well, get an eyeful of this.

(male with Russian accent) Biometrics is a science that studies identification of a person based on what the person is, not based on what person remembers, such as a password.

(Describer) A man rests his head in a clamp so a computer can track his eye.

(male) For my technology to work together with eyes recognition technology, you don't need new hardware. You just, basically, do the software upgrade, and now you have all the traditional information. So now you can do much more.

(narrator) Komogortsev and company are developing a three-layered multi-biometric approach that incorporates dynamic eye tracking. In addition to scanning patterns in the iris, the colored part of the eye, their system tracks movement of the eye globe and its muscles, and monitors how and where a person's brain focuses visual attention. That means tracking how the eyes move when watching action like this video clip, as well as tracking subtle eye movements when looking at flashing dots on a computer screen. Everyone looks at things just a little bit differently.

(male) The eyes can provide the very fast screening-- fast identification of a person. Our technology can identify if a person's trying to spoof the system.

(narrator) Komogortsev didn't set out to be a biometrics guru. As a grad student working on a biomathematical model of the human eye, he was also an avid computer gamer, and he wanted access to a prerelease of Blizzard Entertainment's "World of Warcraft." That was going to cost him $17,000.

(male) So $17,000 was a fortune. I wanted to play that game and I was already researching eye movement. So I wrote a proposal to Blizzard that said that I would allow disabled users who cannot use their arms to play the game. How? By moving their eyes.

(narrator) And with that, ideas for new applications, based on his modeling, started flowing. He says multi-biometric systems like his will eventually pay off in ways far beyond gaming and computer security.

(male) Now you can detect not only the identity, but the state of the person, that being fatigue or stress, or if the person has had alcohol. You can use this technology to detect concussions. We would put this technology in the helmet of football players.

(narrator) So with these extra layers of security, are biometrics ready to go mainstream? I think the ayes [eyes] have it.

While many of rely on passwords to protect their identity, there's more sophisticated identity recognition technology called "biometrics" for use. Security measures that use biometrics rely on a person's unique characteristics and traits rather than on what that person can remember, such as a password. Ocular biometrics, in particular, relies on iris and retinal scanning. With support from the National Science Foundation, computer scientist Oleg Komogortsev and a team at Texas State University are taking the technology a step further, making it even more secure, reliable and nearly impossible to fool. Part of the National Science Foundation Series “Science Nation.”