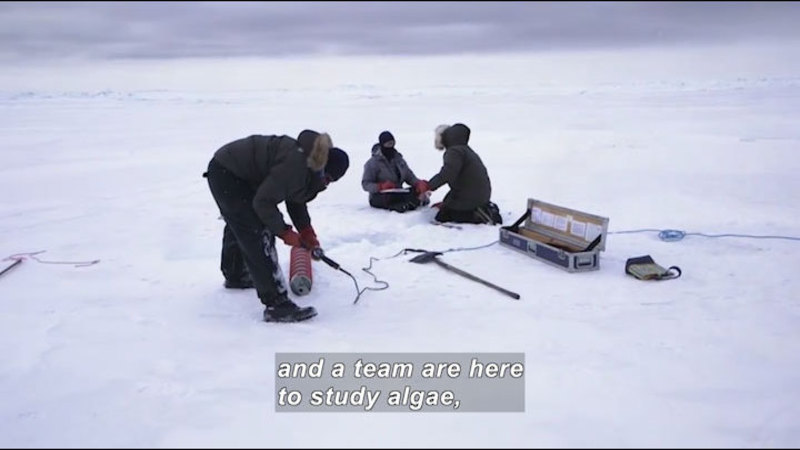 (Describer) In an animation, streams of light collide to create a globe filled with water. Title: Science Nation. In a warehouse, a man reads a list.

Snacks, my scooper duct-taped with it.

(male narrator) Cases packed--check. Sled loaded--check. Thermal pants on--check. For this team of marine ecologists, it's time to hit the ice. That means gunning it.

(Describer) They head out on snowmobiles.

It may be late spring, but it's a frigid ride out onto the sea ice off Barrow, Alaska.

(Describer) Holes are drilled in the ice.

Desolate as it looks, the ice is actually teeming with life. With support from the National Science Foundation, Craig Aumack, with Columbia University, and a team are here to study algae, microscopic aquatic organisms that form the very base of the marine food web. Some even live in the ice itself, dormant all winter until the spring sunshine kickstarts a growth cycle.

(male) They begin blooming, implying that they are multiplying at a great and exponential rate.

Then as the snow completely melts and they start getting lots and lots of light, they migrate down to the bottom of the ice, eventually leaving the ice into the water column.

(narrator) Algae may not seem as sexy as polar bears, but without the algae, nothing could live here.

(Describer) Creatures are studied under a microscope.

(male) We are trying to trace the algae that grow within the ice to the underlying marine systems. What organisms are grazing on it? Do they prefer it over algae grown in the water column, and how much do sea floor organisms graze the algae once it's there?

(Describer) Another wide hole is drilled.

(narrator) They drill ice cores to measure algae levels and collect tiny algae eaters like these from the water and underlying mud.

(Describer) A fish-shaped camera is lowered into the hole.

They drop underwater cameras down under the ice.

(Describer) A net is dragged out of a hole.

(narrator) On the day we were there, they netted this jellyfish. They'd seen them with their cameras, but this is the first they've hauled up.

(Describer) It's shaped like a flat disc with tendrils hanging down.

(male) It was like, wow, our jellyfish even adapted to swim so close to the bottom and drag their oral tentacles because they're feeding on the algae along the bottom during this time of year.

(Describer) In a lab, water is poured from a plastic bag into a tube.

(narrator) They run tests to see what kinds of algae the critters harvested on the ice had been eating. Going forward, climate change could mean less snow cover on the ice earlier in spring. That could mean disruptions to the food chain's delicate balance. During years when there's not very much snow,

there'll be more light early on and an early bloom.

(narrator) Marine biologist Andy Juhl has done field work in Alaska since 2005. He says climate change likely will alter this habitat in ways we can't predict.

(male) Large marine animals, seals and beluga whales and bowhead whales, the polar bears. All of those organisms are here because it is an incredibly productive environment. Typically, there's a long line of connections until you get to big animals. The entire food chain rests upon the algae.

(narrator) Aumack says algae could be a canary in the coal mine for climate change in the Arctic, early sentinels of a changing ecosystem. So buckle up. We might be in for a wild ride.

Welcome to Barrow, Alaska, where a team of marine ecologists gears up to hit the sea ice that is actually teaming with marine life. With support from the National Science Foundation (NSF), Craig Aumack of Columbia University and a team have come here to investigate how algae in the sea ice contributes to the underlying marine ecosystems, and which marine organisms depend on the algae for nutrition. Part of the National Science Foundation Series “Science Nation.”