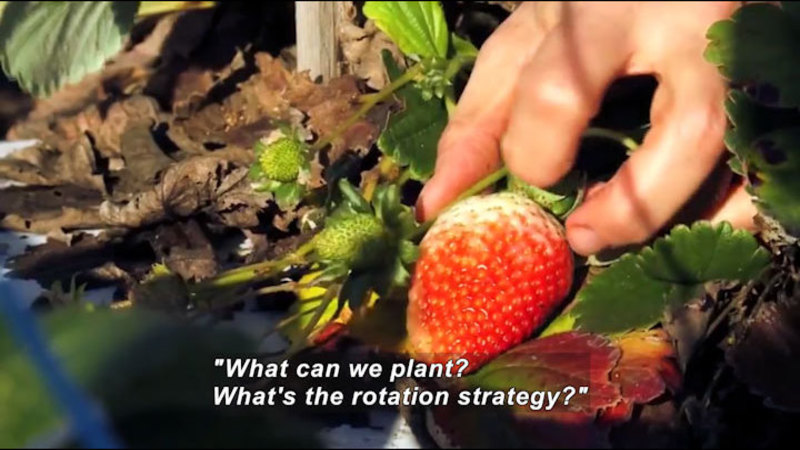 (Describer) In an animation, streams of light collide to create a globe filled with water. Title: Science Nation. Many thin metal pipes arch over rows of green leafy plants. A few workers hoe around smaller plants and a man drives a small tractor.

(male narrator) In the strawberry and raspberry capital of California, grower John Eiskamp wants the crops in his fields to not just grow, but thrive. That could be a challenge, especially with water in short supply. So he's working with some pros, mathematicians actually. A person will want to make the most profit using the least water, while meeting market demands.

As mathematicians, we were hoping to offer a different way of looking at a problem, "What can we plant? What's the rotation strategy?" We hope to use mathematical approaches and algorithms to analyze those things.

(Describer) A table of numbers is displayed.

This is also a snapshot of prices and other things.

(narrator) With support from the National Science Foundation, mathematicians Kathleen Fowler and Lea Jenkins head a team that's tackling the problem of water use in the Pajaro Valley. It's part of their work with the American Institute of Mathematics, or AIM.

(female) Good mathematics happen when people come together with different points of view and work together.

(narrator) AIM's Estelle Basor grew up in a farming family. I'm not sure that a lot of the public realizes the risks involved. If we can just help smooth out some of the decision-making process and help solve a few problems the growers might have, it's a really good step forward.

(female #2) We call it the Virtual Farm Model.

(narrator) The team shares its findings at the Santa Cruz County Farm Bureau. They create models, helping growers pinpoint which crops to plant where, factoring in growing cycles, costs, and groundwater levels.

As the irrigation cycle is ongoing, you see water move through the soil profile. When it's reaching beyond the root zone, it's time to turn the water off.

(Describer) He checks graphs on a tablet.

(narrator) AIM is putting math to work, tapping a broad range of real-world problems, from understanding headaches to climate modeling to making medical imaging more accurate. And their agricultural work will benefit farmers far beyond these berry fields. Those are very abstract frameworks

The Pajaro Valley, in the Monterey Bay area of California, is ideally suited for agriculture. In fact, the Pajaro Valley and the nearby Salinas Valley produce nearly half of the strawberries grown in the United States yearly. But, the water source for the valley is a confined underground aquifer that is slowly being depleted. In January of 2011, the American Institute of Mathematics held a Sustainability Problems workshop with the goal of bringing together mathematicians and industry representatives to work on a variety of sustainability problems, including renewable energy, air quality, water management, and other environmental issues. Part of the National Science Foundation Series “Science Nation.”