Science Nation: WIFIRE Helps Firefighters Get a Jump on Wildfires 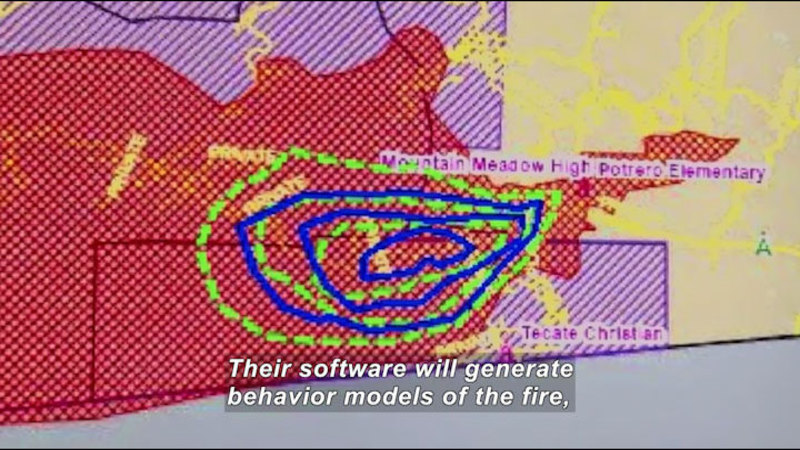 (Describer) In an animation, streams of light collide to create a globe filled with water. Title: Science Nation. Flames are on the floor of a forest, and firefighters approach from the other side of a fence.

(male narrator) When it comes to fighting wildfires, strong winds can make a bad situation much worse.

(male) You can't control a wind-driven fire. It's best to evacuate the personnel to safety. Thank goodness it's not coming north.

(Describer) Three people watch a news report about a fire.

It's not burning north, it's burning west.

(narrator) University of California San Diego computer scientist Ilkay Altintas is using cutting-edge technology to help firefighters and other first responders get a jump on fast-moving wildfires. As we collect images every minute or every five minutes,

we can stitch those together and create videos.

(narrator) With support from the National Science Foundation, Altintas and her interdisciplinary team are developing a cyber infrastructure system called WIFIRE. It uses sensors, high-speed communication networks, high resolution imagery, and advanced computing to forecast where wildfires are heading as the fire burns. We have access to satellite information,

supercomputers, and great data integration and management. Our goal is to put all this knowledge and infrastructure together.

(Describer) A red digital blob spreads over a map.

(narrator) Using San Diego County as a testing ground, the WIFIRE system taps into a high-performance, wireless network that monitors a steady stream of images and data from cameras and weather sensors mounted on radio antenna towers all over the county.

(Describer) A house burns at the end of a drive.

In the future, when fires start, the data will be fed into the university's supercomputers. Their software will generate behavior models of the fire, where it's likely to spread and path of destruction. The more information, the more accurate the models. While the fire is progressing, we're learning its dynamics,

(female) The quicker we can get this information, the quicker firefighters can make decisions.

(male) You couldn't recognize where my house was.

(narrator) In 2007, a wildfire destroyed his home, while helping build the network that might have saved it. If this network would have been in place, I think this fire could have been contained.

(male) Imagine that you could have a detailed model of a wildfire path, and you could actually compute the progress of the flames faster than real time and provide advanced warning to the first responders.

(narrator) The team hopes a national, even global, cyber infrastructure will be built in the future. They want to make wildfire prediction as reliable as forecasting any other threatening storm.

In recent years, the number and scale of wildfires in the U.S. has risen, threatening cities and forests and forcing large-scale evacuations. NSF is supporting the WIFIRE initiative, led jointly by UC San Diego and the University of Maryland, to better monitor, predict, and mitigate wildfires in the future. Part of the National Science Foundation Series “Science Nation.”