Science Nation: Next Generation Robotic Legs for When the Going Gets Rough 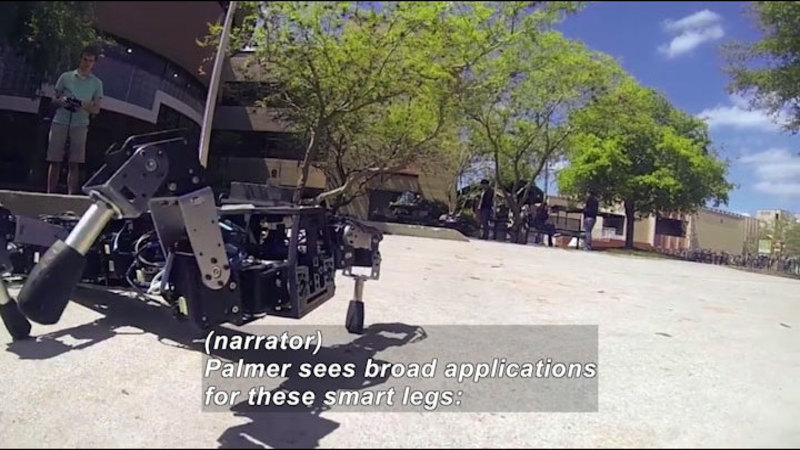 (Describer) Beside a globe filled with water, Title: Science Nation. A man places different lengths of wood blocks next to each other, then picks up a small flat robot with hinged legs.

(male narrator) As a teenager, computer engineer Luther Palmer wanted to build The Terminator. While this robot might look more like a big roach than Arnold Schwarzenegger, its unique leg system is designed for rough running.

(male) What we are asking robots to do now, terrestrial robots,

(Describer) It climbs over the blocks.

is the tip of the iceberg of what future robots will do. One of the ways to extend the capabilities of robots is by adding more complex legs

and making those legs operate more smartly. What has been a nemesis in the past has been uneven, unexpected, or loose terrain.

(Describer) A computer animation walks like a marching insect on a monitor.

(narrator) With support from the National Science Foundation, Palmer and his team at the University of South Florida are designing simulation models for the next generation of robotic legs, then building them in the lab.

(male) In the past, legs have been built with a glorified pogo stick, where there's just a linear spring. If we put knee and ankle joints on legs, what should the springs at the knee and ankle look like?

(Describer) Horses run in a field.

(narrator) Palmer studies the biomechanics of animals adept at running on rough ground to program the computer algorithms that power the simulations.

(male) We do a fair amount of gathering information from biological sources about how animals, how horses run--one of the more well-studied animals, how humans run--pulling data from motion capture systems. That gives us a framework to form the algorithm.

(Describer) The robot walks over planks.

(narrator) A big challenge is designing robotic legs that move effectively and efficiently without sucking up too much computer processing power. We move around without thinking about every step we take. Why shouldn't a robot?

(male) We know that humans and animals have two modes of walking or running. One is a top-heavy, brain is telling the legs what and when to do it. But when running fast or moving quickly, there isn't enough time for much information exchange. So that's what we try to model with our hexapod walker.

(narrator) Palmer sees broad applications for these smart legs: military robots that can walk alongside soldiers to carry heavy loads, spacefaring robots that run like horses over the surface of mars, and search-and-rescue robots that can move through a debris field looking for survivors.

(Describer) The robot crosses a floor.

(male) A mobile robot that has legs, that can run and jump and even climb walls would be a valuable asset in some situations where time is of the essence.

(narrator) You have to crawl before you can walk. Think of these little guys as giving a leg up to running robots to come.

One of the major challenges in robotics is designing robots that can move over uneven, loose, or unexpected terrain. With support from the National Science Foundation, computer engineer Luther Palmer and his team at the Biomorphic Robotics Lab at the University of South Florida are designing computer simulation models for the next generation of robotic legs, and then building them in the lab. The team studies the biomechanics of animals adept at running on rough ground to program the algorithms that power their computer simulations. Part of the National Science Foundation Series “Science Nation.”