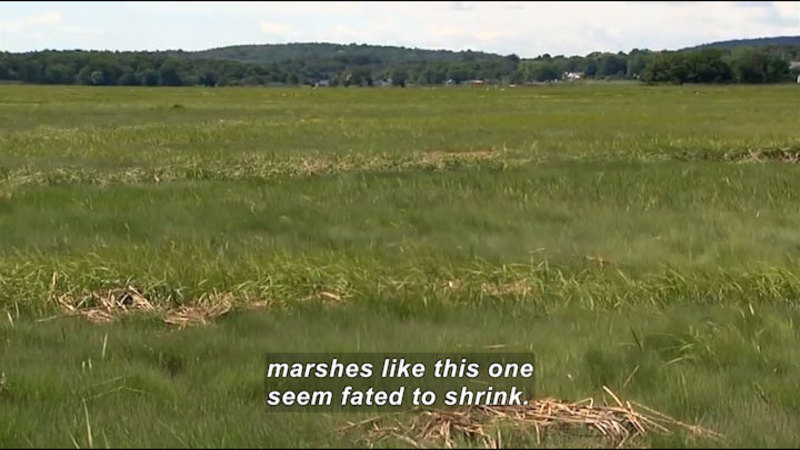 (Describer) Two people drive a small boat through a waterway.

(female) Locals call it the Great Marsh. It's the largest remaining salt marsh in the Northeast.

(male narrator) Here at the Plum Island Estuary on the Massachusetts coast, the marsh floods like clockwork. At high tide, you can pass over mud flats into the grass in a boat.

(female) This is a rich area for shellfishing also.

(narrator) At low tide, the ocean waters recede, leaving behind fresh deposits of nutrient-rich food for the birds and other wildlife, including juvenile game fish like striped bass. It's an ecosystem that is at once both hardy and fragile. In the 1800s and early 1900s, there was extensive human destruction of marshes. A lot of them were drained.

(narrator) With support from the National Science Foundation, biogeochemist Anne Giblin of the Marine Biological Laboratory and her team are studying these salt marshes to determine how this 2,000-year-old ecosystem is adapting to human development and to changes in climate and sea level.

(Describer) By a wall of wet soil where grasses grow…

The big question is how will these marshes survive if sea level rise rates increase.

(narrator) For example, Giblin says salt marsh cordgrasses have adapted to handle daily flooding. You can imagine, if these grasses

(Describer) She touches some of the roots.

are underwater several hours daily, there's very little oxygen down here, so the plants have a hollow stem system that extends underground. It's a way for the plant to keep some oxygen going to the below-ground tissues, to the roots.

(narrator) Salt marsh hay isn't as well equipped for daily inundation. It's the dominant grass in our marsh. A question is, as sea level rises, what's gonna be the fate here?

(Describer) She goes to a tower.

(narrator) Researchers also set up sensors to measure how much carbon dioxide plants are taking up from the atmosphere and storing in the sediments.

(female) There is interest in getting a quantitative handle on how much carbon is being stored in coastal areas, such as salt marshes and sea grass beds. It's called blue carbon.

(Describer) A fish flops in a pail of water.

(narrator) There are juvenile fish taking shelter in the marsh until they're big enough to brave the open ocean.

(male) We tag the fish, take muscle tissue samples, look at their diets and their energy use.

(female) The marsh area is an important nursery ground for fish. They rely on organic matter that's being produced and habitat complexity to hide and escape from predators.

(Describer) One is released.

(narrator) As the climate changes and sea levels rise, marshes like this one seem fated to shrink. Giblin hopes better understanding of how the ecosystem is responding to change will help managers better plan and save as much as we can for the future.

The estuary is part of the Plum Island Ecosystems LTER (Long Term Ecological Research). The LTER Network was created by the National Science Foundation (NSF) in 1980 to conduct research on ecological issues that can last decades and span huge geographical areas. Biogeochemist Anne Giblin, of the Marine Biological Laboratory, is leading a team of researchers who are studying the Plum Island salt marshes to determine how this 2,000-year-old ecosystem is holding up under climate change, land use changes, and sea-level rise. Part of the National Science Foundation Series “Science Nation.”