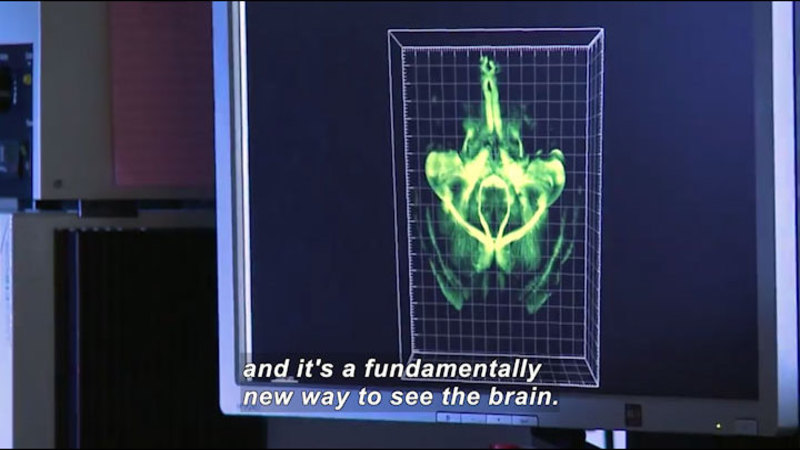 (Describer) In an animation, streams of light collide to create a globe filled with water. Title: Science Nation. In a 3D computer image, tiny dots run along tubes curving around a round shape.

(male narrator) This is a rare look at the circuitry inside a brain, the paths that electrical impulses take as they speed along neurons from one part of the brain to another.

These connections between neurons are involved in everything we do, and no one's pattern is the same. In many ways, we know some things about the brain, but we don't really have deep insight into what the brain is really doing. We don't understand how circuits work.

(narrator) That's because a milky, opaque tissue coats much of the brain, clouding the view until now.

(Describer) The tiny dots are magnified to reveal a fiber network.

(male) You can actually fly in and look around, see which connections are next to which other connections.

(narrator) With support from the National Science Foundation, neuroscientist and psychiatrist Karl Deisseroth and his team at Stanford University have developed a way to chemically dissolve that opaque fatty tissue in the brains of dead animals. In its place, they insert a transparent hydrogel that keeps the brain intact and provides a window view into the brain's neural structure and circuitry. Deisseroth calls this process CLARITY, and it's a fundamentally new way to see the brain.

(male) So this is a whole mouse brain. We're gonna fly in and look around. Where you see groups of greenish-yellow spheres, those are individual neurons.

(Describer) Each is at the end of a strand. A longer view shows green, red and blue areas.

You see how they're arranged relative to each other. The different colors, the green, the red, and the blue, each of those are labels for a different kind of cell. Our goal is to understand the system in its entirety, but also at high resolution at the level of its wiring and the individual cells.

(narrator) Deisseroth says researchers will be able to use these 3D maps to compare and contrast brains that function normally with those that don't and take steps to fix the problem. In my clinic, I see patients who suffer from depression. People with depression, they suffer from, in many cases, severe anxiety. We have already found that there are connections from one part of the brain to another, that if you turn them up or down, you affect behaviors like reward and motivation and anxiety and fear.

(narrator) CLARITY has been widely hailed as an important advance in whole brain imaging. Other medical specialists are seeing CLARITY's potential too for studying the electrical pathways in the heart and how damaged fibers in the spinal cord cause pain. Deisseroth says this new window into neural circuitry opens up nearly endless possibilities for medical advances. Clearly a breakthrough indeed.

The connections between neurons in the brain are involved in everything humans do, and no one’s pattern is the same. Imagine the medical breakthroughs if doctors understood more about the brain’s circuitry. With support from the National Science Foundation, neuroscientist and psychiatrist Karl Deisseroth and his multidisciplinary team at Stanford University have developed a new imaging technology that essentially makes the brain transparent. They can then generate detailed 3-D images that highlight specific neuronal networks. Deisseroth has named this process “CLARITY.” Part of the National Science Foundation Series “Science Nation.”