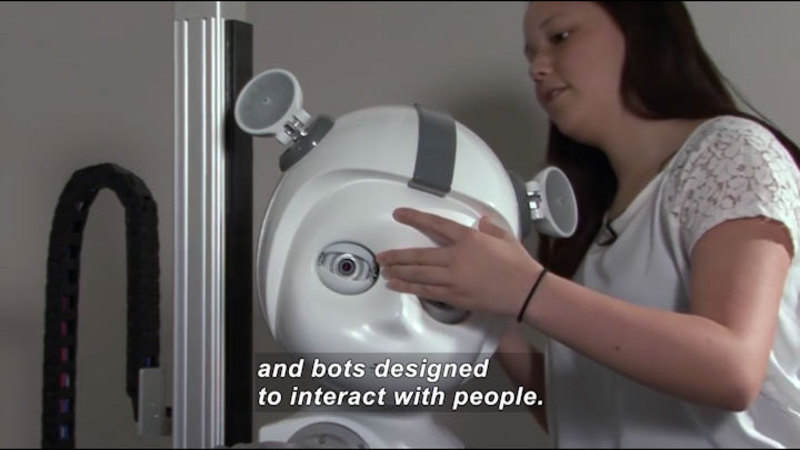 (Describer) In an animation, streams of light collide to create a globe filled with water. Title: Science Nation. A robot with a head and an arm spoons yogurt from a bowl to a man's open mouth.

(narrator) There are robots designed to lend a helping hand...

My name is Curi. and bots designed to interact with people. College students from across the U.S. are putting their brain power to work programming these robotic maneuvers. It's called SURE, a ten-week, summer, undergraduate research experience.

(female) You're involved in research, you have hands-on applications. What happens is you like, "Oh, I understand what calculus is. I'm actually using it to design a robot and make it move."

(Describer) A small one is covered in blue fur.

(narrator) With support from the National Science Foundation, robotics engineer Ayanna Howard, of Georgia Tech, and her colleagues are grabbing the attention of students from colleges big and small. The goal: to encourage underrepresented students to apply for cutting-edge graduate work in science and engineering.

(female) When you design a robot for an individual or a child with a disability, you're providing a resource to change the world.

(narrator) At NASA, Howard worked on the Mars technology program. But now one of her missions is to motivate and recruit undergraduates, like Brooke Bosley, to enter the field of robotics. You can get colors, you can get shapes.

(Describer) She talks to Bosley, who sits at a laptop by the blue robot.

I feel that mentoring is very important, especially for minorities and females. It's not a lot of people who are supportive when it comes to going into technology and science fields.

(Describer) Another robot is taller.

We all have our independent projects, but we're independently working together. So I've been setting up a Web environment to be able to control robots remotely.

(male) It's a program designed to help people

who want to pursue robotics in graduate school to get their feet wet. There are parts of robotics that I would never encounter because my institution doesn't have any robots.

(Describer) A computer image shows a green form around one side of a man's face. Caleb Little:

Once we get it accurate enough that a robot can use it... The robot has inherently no idea of where it's going. You have to teach it how to do that.

(narrator) The task for professor Charles Kemp's team is to program a health care robot to feed a patient a spoonful of yogurt.

(male) I think we're gonna have a personal robotics revolution. One of the great ways in which personal robots will be able to benefit people is to provide this sort of assistance.

(narrator) Participants get tips on applying to grad school and paying for it. They also learn something lasting: confidence. One of the biggest "aha" moments I've had interacting with students is when they said, "I didn't think I could do it, but now I did."

(narrator) More than 70% of SURE program participants have gone on to grad school. Now that's getting close to a SURE bet.

College students from across the U.S. are getting an opportunity to program robots at the Summer Undergraduate Research Experience (SURE). It’s an immersive robotics research experience, designed to attract under-represented students into graduate school in the fields of engineering and science. In addition to the hands-on technology, the students also get advice on how to apply and pay for graduate school. Part of the National Science Foundation Series “Science Nation.”