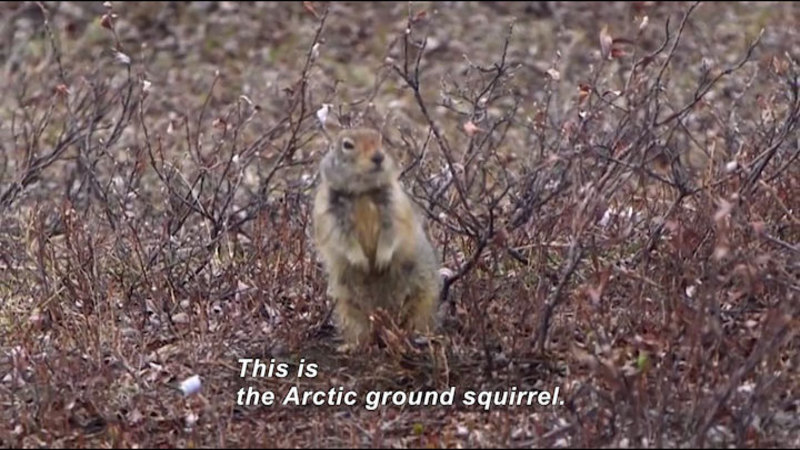 (Describer) In an animation, streams of light collide to create a globe filled with water. Title: Science Nation. A brown field leads to a rocky mountain streaked with snow.

(male narrator) It's a bright, spring day on the tundra. All is still, and then comes the pitter-patter of little feet.

(Describer) A grey and brown squirrel scurries through the brush.

This is the Arctic ground squirrel. For scientists interested in animals that have developed highly specialized adaptations to extreme environments, these little guys really take the cake...er, carrot.

(Describer) One eats one by a trap.

And they have a ton to teach us about circadian rhythms and biological clocks, timing mechanisms inside the brain that control activity levels.

(Describer) In a brain model, a light between two balls is highlighted.

(male) Arctic ground squirrels maintain circadian rhythms throughout the Arctic summer, even though it's essentially a constant-light environment.

(Describer) A squirrel in a cage trap is sedated and weighed.

(narrator) With support from the National Science Foundation, physiological ecologist Cory Williams, with the University of Alaska Anchorage, and a team are at the Toolik Field Station in northern Alaska to study the Arctic ground squirrel on its home turf.

At this time of year, the sun never sets in this beautiful valley.

You might guess the squirrels would take advantage of all that extra daylight to forage and fatten up for the long, dark, cold winter. But it turns out they don't.

(Describer) One stands on its hind legs munching.

Despite constant daylight, these squirrels keep strict bankers' hours: early to bed and late to rise. Their body clocks have evolved to work just fine without the help of the day/night cycle so important to other animals like humans.

(male) You have one master clock that's located in the brain. This is the clock that's entrained to the light/dark environment.

(Describer) A sedated squirrel is attached to cables.

(narrator) So how do they do it? Data from body temperature loggers and light-sensitive collars suggest their body clocks are keyed to the quality of the light as well as temperature.

(male) It's only during this midday interval that it's warm enough to be within the thermoneutral zone for these squirrels. So if they're active at other times of day, then they would have to expend more energy while they're foraging.

(Describer) Another squirrel is in a clear container.

(narrator) How ironclad is the squirrel body clock? Williams and company put them through a series of phase-shift experiments in this chamber, switching up light and temperature conditions to essentially give the squirrels a bad case of jet lag.

(male) How rapidly can they re-entrain in the absence of a light/dark cycle? And what are the energetic consequences of being out of phase with the natural environment?

(narrator) Back in Anchorage, environmental physiologist Loren Buck works with squirrels in his lab year round. This fellow was still hibernating... torpid, as they say.

(Describer) He keeps sleeping in his hands.

Buck says clock disruptions are linked to many human ailments: seasonal affective disorder, obesity, cardiovascular disease, Alzheimer's, even cancer. Those are good reasons to look at how an animal like the Arctic ground squirrel finely tunes its body rhythms. Isn't it worth knowing how they do that? Is there a way that we could hijack that molecular machinery to better understand human clock function and maybe treat clock function when it's in poor repair?

(Describer) One sits in a cup.

(narrator) Answers to problems can be found in unexpected places, just watch where you step.

The arctic ground squirrel has developed highly specialized adaptations to extreme environments. This species maintains circadian rhythms throughout the arctic summer, despite the almost ceaseless daylight during this period. The squirrels’ body clocks have evolved to work just fine without the help of the day/night cycle. With support from the National Science Foundation, physiological ecologist Cory Williams of the University of Alaska, Anchorage, and a team of researchers traveled to the Toolik Field Station in northern Alaska to study the arctic ground squirrel on its home turf. Part of the National Science Foundation Series “Science Nation.”