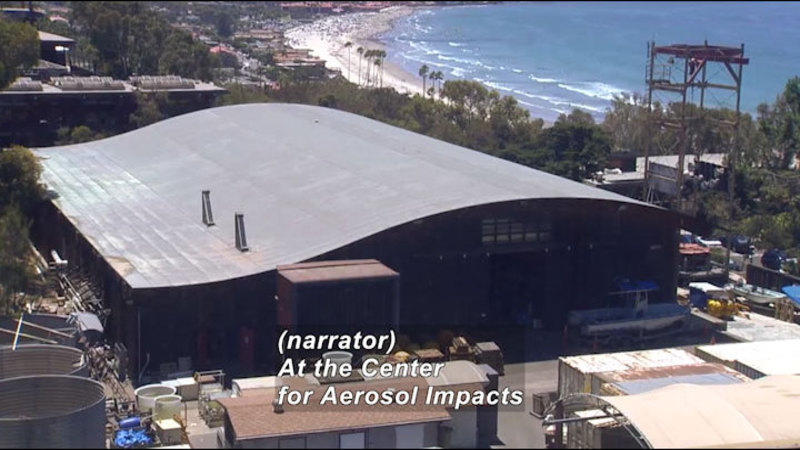 (Describer) People walk along a beach.

(male narrator) Nothing refreshes like a deep breath of ocean air. But why the salty smell? It's actually an aerosol: a fine mist of droplets, each one packed with not only salt, but life from the ocean: phytoplankton, bacteria, even viruses.

(female) We're interested in aerosols that are produced naturally or by humans in the real world. Aerosols are mixtures, these really complex mixtures.

(Describer) Water is poured into a tank.

(narrator) With support from the National Science Foundation, atmospheric chemist Kimberly Prather at UC San Diego and a team of scientists around the country are working to better understand the role these marine aerosols play in weather and climate change.

(female) The single largest uncertainty in climate change is how do aerosols affect clouds and climate.

(narrator) At the Center for Aerosol Impacts on Climate and the Environment, Prather and her team have pumped sea water into this hydraulics lab from the Pacific Ocean and spiked it with nutrients to get tiny, plant-like organisms, called phytoplankton, to grow.

(female) Phytoplankton give us almost half our oxygen we breathe. They fix carbon from the atmosphere, like CO2, and then they turn it back into oxygen, just like plants. So you can think of them as little forests under water. The goal of this experiment is to try and replicate the complexity of the ocean in the lab.

(narrator) Prather and company know that phytoplankton change the chemistry of the water. They want to better understand how those changes impact the composition of sea spray aerosol.

(narrator) The team hopes data from the tank experiments will lead to improved computer climate models.

(female) So, we measure chemical composition. We can also measure different properties of these particles. For example, how they interact with water. We need to measure these properties in order to incorporate those into climate models.

(narrator) Prather co-directs the center with Vicki Grassian of the University of Iowa.

(female) We are learning new things by having this ocean in the laboratory. That allows us to test hypotheses that have been entrenched in people's thinking and see if they're true or not. We have surprises and new ways of looking at the problem.

(narrator) With 70% of our earth covered by water, Grassian and Prather say we need to understand the chemistry of sea spray aerosols before we can ever really understand our changing climate. And to do that, well, they're making some waves.

Sea spray aerosols occur naturally in the salty ocean air, and there’s much more in each of those tiny bursting bubbles than salt. They’re bursting with ocean life, from bacteria to phytoplankton--even viruses. Because sea spray aerosols seed clouds, they affect the climate. With support from the National Science Foundation (NSF), atmospheric chemist Kimberly Prather of the University of California, San Diego, and chemist Vicki Grassian of the University of Iowa are leading a team of scientists around the country who are working to better understand what role sea spray aerosols play in weather and climate change climate models. Part of the National Science Foundation Series “Science Nation.”