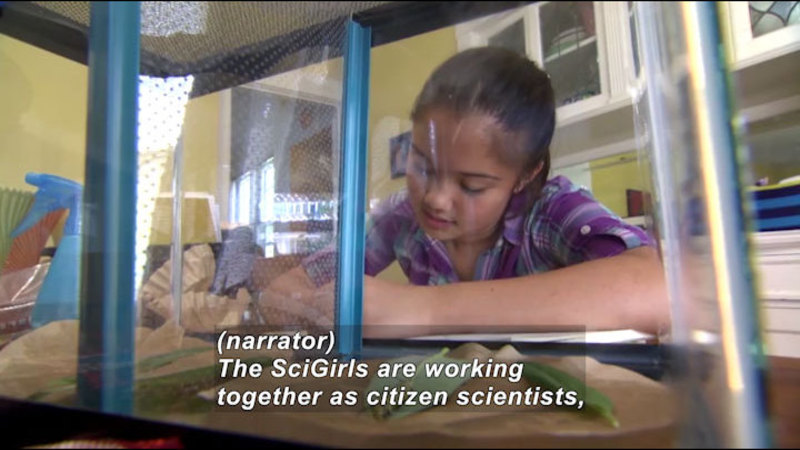 (Describer) In an animation, streams of light collide to create a globe filled with water. Title: Science Nation. Three girls look at a chrysalis hanging in an enclosure.

(Describer) A butterfly climbs out.

Look at how tiny its wings are!

(male narrator) The magic of life unfolds. But for these girls, watching the monarch butterfly emerge and spread its wings is more than a fascinating moment. Cameras are rolling.

SciGirls is a distinctive way of letting girls see themselves succeeding in science and engineering.

(narrator) With support from the National Science Foundation, Richard Hudson and his team at Twin Cities Public Television are putting middle school girls like Mimi, Izzie, and Quinn in front of a national audience on the TV series "SciGirls." The goal is to inspire millions of girls at home to think about careers in STEM: science, technology, engineering, and math.

(male) Izzie and Jake start off with some problem.

(Describer) In a cartoon, the girl has a video chat with a boy whose skateboard has lost a pair of wheels. Disappearing, she looks through different scenes featuring the three real life girls.

During the show, they learn how to solve their problem and learn some science or engineering along the way.

(female) How many legs do insects have?

(girls) Six. It actually has two legs that are folded up there.

(Describer) They look at a monarch butterfly a woman holds.

(narrator) Mentors like Kelly give the girls the support they need to make their own discoveries. I know how that felt when I found an egg or a caterpillar. To see that reaction in these girls has been fun.

(Describer) In one girl's home…

This is how I clean their homes usually.

(narrator) The girls each cared for two caterpillars as part of the monarch larva monitoring project. Meet Mac and Cheese. We usually try not to touch them

because the oils from our fingers can like, clog up the holes that they breathe on. The girls are on mics and wardrobe is good.

(narrator) They also found out something I've known for years: making television sometimes means a lot of standing around waiting.

(Describer) Back at home…

I put their names down.

(narrator) The SciGirls are working together as citizen scientists, gathering data for the pros and learning what research is like. In my SciGirls experience, I really like actually doing it.

I feel that when you read about it, it's just not the same and you won't learn as much.

(male) We let the girls go in their own direction. They surprise us with their creative solutions.

(Describer) They each carry a mesh bag with a butterfly inside, and Izzie opens hers.

(female) Come on, Cheese, don't make this difficult for both of us.

(narrator) After weeks of nurturing the butterflies, the moment finally arrives.

(Describer) They hold them by the wings.

(Describer) They let them go.

(narrator) SciGirls is looking to work another kind of transformation, turning curious, young girls into a new generation of scientists.

The magic of life unfolds, but for adolescents Mimi, Izzie, and Quinn, watching a monarch butterfly emerge from its cocoon and spread its wings is more than a fascinating moment—cameras are rolling. With support from the National Science Foundation (NSF), Richard Hudson and his team at Twin Cities Public Television are putting middle-school girls in front of a national audience on the PBS series “SciGirls.” This is the first television science series designed specifically for girls, ages 8 to 12, to inspire and empower them to consider careers in science, technology, engineering and math (STEM). Part of the National Science Foundation Series “Science Nation.”