Science Nation: Worker Robots That Can Think on Their Feet 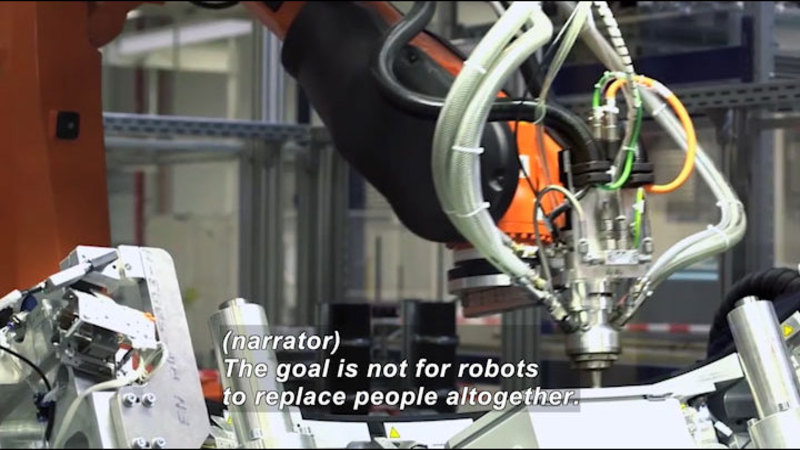 (Describer) In an animation, streams of light collide to create a globe filled with water. Title: Science Nation. A box-shaped robot walks over stacks of wood on six short legs.

(male narrator) Robots come in all shapes and sizes, engineered for all kinds of tasks. Some are cute, others are all arms. What about having to work next to one of these on the job?

I'm a construction worker. I do not want to work alongside any robots. As an educator, it'd be cool to partner up with a robot. Do you think, Nick, you wanna work on robots?

(Describer) Nick, a little boy on the man's shoulders, smiles and nods.

(Describer) In a lab…

(female) We call her Abbie.

She is our favorite robot in the lab because she's always there ready to work with the person that comes into the lab.

(Describer) Abby moves along a line of screws in a table.

(narrator) With support from the National Science Foundation, roboticist and aerospace engineer Julie Shah and her team at MIT are developing robots to work side-by-side with people, a big step forward from many robotic assembly lines today.

(female) They're large, they're dangerous, they're fast moving. That's a very dangerous environment.

(Describer) A man wearing a glove with red lights on it touches a laptop with the other hand.

Let me try the connections there...

(female) We make robots that are not just safe enough, but smart enough to work alongside people.

(narrator) Shah and her team program the robots with artificial intelligence to learn from experience and become more people-friendly. Using overhead cameras and a motion-capture system,

they put Abbie through its paces, figuring out as it goes how to avoid human contact.

(Describer) The arm stops near the man's glove.

I got into the robot's way, and it is waiting for me to place this screw.

(female) We have a very accurate picture of where the person is in the space. The robot can use that in its decision-making to decide what task it does next and how it moves through the space.

We design very fast algorithms that are able to take this real-time information and adapt the robot's motion plan.

(male) The interaction is not very efficient because when I'm placing the screw, the robot stops and waits for me to finish. Aeronautics engineer Pem Lasota says with a little practice, the robot eventually figures out a more efficient work-around.

(male) While I was placing this screw, the robot could move around and work on this one. If you and I worked on a task, we would start out slow then fall into a rhythm, then we'd do it with our eyes closed. We want robots to learn from that experience like people. We want anybody to be able to teach a robot the way I would teach another person.

(narrator) And to be reliable. For a robot to be trustworthy, its performance has to be consistent.

(narrator) The goal is not for robots to replace people altogether. Shah says there's a lot of work that requires the human touch, from building automobiles to fighter jets. But skilled workers could benefit from robot colleagues working with them to handle more tedious or dangerous tasks. Our algorithms provide an opportunity to begin integrating robots to do little pieces of this work.

(narrator) Shah sees humans and robots working together regularly in real manufacturing settings within five years. Sometime we can all use a helping hand.

Assembly line workers won’t be swapping stories with their robotic counterparts any time soon, but future robots will be more aware of the humans they’re working alongside. With support from the National Science Foundation, roboticist and aerospace engineer Julie Shah and her team at the Massachusetts Institute of Technology are developing next generation assembly line robots that are smarter and more adaptable than robots available on today’s assembly lines. Part of the National Science Foundation Series “Science Nation.”