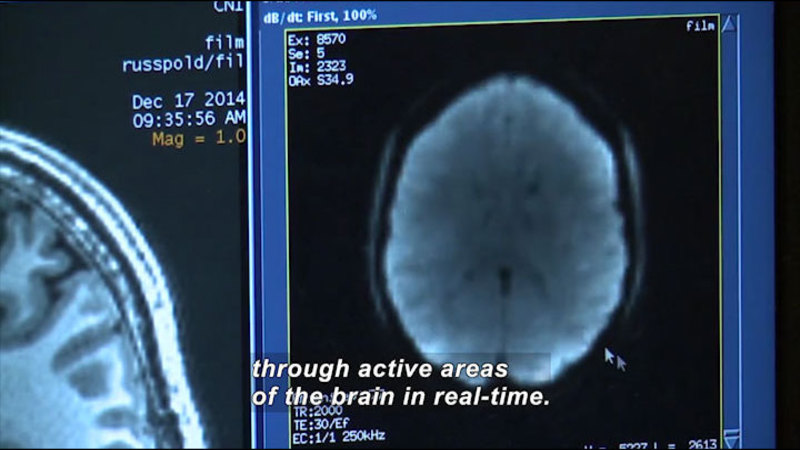 (Describer) In an animation, streams of light collide to create a globe filled with water. Title: Science Nation. Digital images of a brain are white with red blotches in various areas.

(male) This one is sort of interesting. This is a study of dental pain.

(male narrator) These images illustrate how cognitive neuroscientists, like Russ Poldrack, are trying to read minds, so to speak.

(Describer) A man lies on a table that slides into a tunnel.

(narrator) The fMRI is one of the most powerful tools available to image human brain function. But they're expensive, and right now there is only limited infrastructure for sharing results.

(male) This is somebody reading words.

(narrator) With support from the National Science Foundation, Poldrack and a team at Stanford University

want to change that with a project called OpenfMRI. They're working to make these dynamic brain scans widely available in a computer database to scientists all over the world.

(male) The overall purpose of OpenfMRI is to give people a framework to share their data.

(narrator) Sharing fMRI scans is difficult because the data sets are large and cumbersome. Poldrack and company have standardized their format so they can be easily and securely uploaded to the OpenfMRI database.

(male) Our lab studies cognitive and brain development, both typical development as well as children with ADHD and autism. Neuroscientist Venod Menon is using OpenfMRI to validate his own research. He says the more scans he can analyze, the more certain he can be of his conclusions. They give us more confidence that these findings

(Describer) He sits by a side image of a brain with red and blue running through the folds.

are strong and robust, and therefore they're worthy of further study.

(narrator) And as more studies are added to the library, he sees it as a powerful tool for diagnosing and treating neurological disorders.

(male) We'd be able to say how confident are we that this child might have autism, based on some features of their brain imaging data. I think we'll see a lot of progress in the next five years.

(male) You really have to bring together lots of data in order to be able to answer these questions. The willingness of researchers in the field to share their data seems to be really increasing.

(narrator) Poldrack expects the shared database eventually will provide a comprehensive map for scientists to navigate the complex landscape of the brain. It's all about, well, putting their heads together on it.

Researchers around the world can compare notes on one of the most powerful tools available for imaging human brain function, the fMRI, thanks to support from the National Science Foundation (NSF). The project, called OpenfMRI, allows scientists to share their data easily and securely in a standardized format. The advantages are clear to Stanford neuroscientist Vinod Menon, who researches brain development and is using OpenfMRI to validate his research. Menon says as more studies are added to OpenfMRI, it becomes a powerful tool for diagnosing and treating neurological disorders. Part of the National Science Foundation Series “Science Nation.”