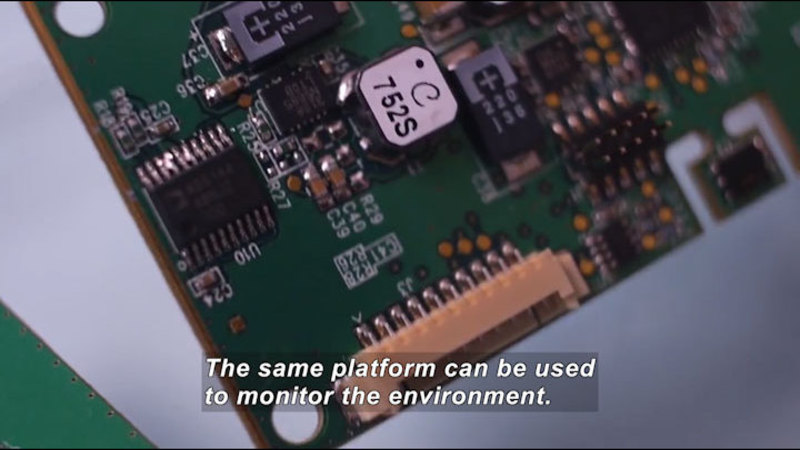 (male narrator) What if a piece of clothing could alert you when pollution, like smog, is about to take its toll on your heart or lungs? That's what's in the air at ASSIST, the Center for Advanced Self-Powered Systems of Integrated Sensors and Technologies.

(Describer) A few people confer at a mannequin wearing a tight shirt.

(narrator) With support from the National Science Foundation, electrical engineer Veena Misra and her team at North Carolina State University are using nanotechnology to develop small, wearable sensors that will monitor a person's immediate environment and vital signs.

(female) One part of the sensor, for example, on the wrist, can monitor your hydration levels, your heart rate, your EKG if it's located a little bit above, in the arm. The same platform can be used to monitor the environment. There we're looking at gasses, such as ozone, carbon monoxide, and nitrogen dioxides. Our technologies will really enable that connection and help people make better decisions and also prevent themselves from getting exposed to toxins in the environment that can exacerbate certain conditions like asthma.

(Describer) A man breathes through a tube as he walks on a treadmill.

(male) This is the testing we would do.

(narrator) Asthma specialist Dr. David Peden is helping the team test the effectiveness of the prototypes to serve as an early warning system.

(male) So that people could get a real-time understanding of how their personal environment might be affecting their health, and be able to say, "I've had enough pollution, I need to escape it, or I need to change my activity level."

(Describer) The pattern of a circuit is adjusted on a computer.

(narrator) Misra's team is developing small, nanotechnology devices that don't use batteries and will never need a recharge.

(female) Our technologies will harvest power from the human body. The other thing that getting away from battery gets you is form factor. We can embed it inside clothing because the battery is no longer the limiting size in the platform's requirements.

(Describer) A sensor flexes with a clear film.

(narrator) This clean room is where the sensor components are manufactured. Eventually, they will be embedded on low-energy chips. Mehmet Ozturk says comfort is a must.

(male) We are trying to do is create flexible energy harvesters that go on the human body.

(Describer) They're the size of a fingernail.

So the goal is, essentially, rely on heat and motion to generate all the electrical energy we need so that we can power our devices.

(Describer) A sensor is held up to the mannequin.

(narrator) The plan is for the device to send data wirelessly to the wearer's cell phone, even to a doctor.

(female) In five to ten years, we want to see our technologies inside wearable health devices that are changing the way patients are taking care of their health and also changing the way the doctors prescribe treatments for patients.

(narrator) So, update your wardrobe to improve your health? That's quite a fashion statement.

The Nanosystems Engineering Research Center (NERC) for Advanced Systems of Integrated Sensors and Technologies (ASSIST) at North Carolina State University is developing technology that will alert someone when air pollution is about to take its toll on their heart and lungs. ASSIST Director Veena Misra and her multidisciplinary team are using nanotechnology to develop small, wearable sensors that monitor a person’s immediate environment, as well as the wearer’s vital signs. Part of the National Science Foundation Series “Science Nation.”