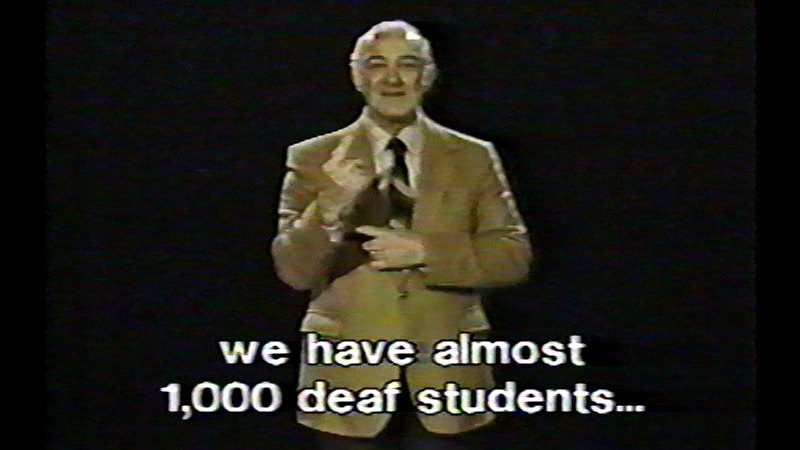 NARRATOR: The Described and Captioned Media Program presents a production of the National Technical Institute for the Deaf, Robert Panara: A Profile.

I come from Rochester, New York, from the National Technical Institute for the Deaf, NTID.

I myself graduated from Gallaudet College in 1945. Now I work at the National Technical Institute for the Deaf, NTID, where I began in 1967. It was my good fortune to be chosen as the first deaf person to work on the staff there. I helped develop the programs at NTID, which is on the campus of the Rochester Institute of Technology, RIT. It's a hearing college, founded a long time ago, in 1829. NTID was chosen by a government committee to be sponsored by RIT.

It was the first attempt to, quote, "mainstream" deaf college students with hearing students.

We began with a small group of 70 students way back in 1968. At that time our students could be compared to fish in a fish bowl.

70 small fish, and the eyes of the nation were on them, watching them carefully to see how those deaf students could succeed on a campus of a hearing college. I'm happy to say that those small fish did thrive. They multiplied, and grew bigger and bigger and bigger. We had to put them in a larger fishbowl, and later a larger fish bowl. The enrollment kept increasing, and the staff expanded, so that now we have almost 1,000 deaf students mainstreamed with about 8,000 hearing students. My work involves many different things. I helped develop curriculum. I helped establish the English department at NTID.

And later on, I established the theater department. I directed the theater program while still teaching courses in RIT in the College of Liberal Arts.

I've been teaching deaf and hearing students in the same class. I enjoy that challenge. It was my good fortune to be the first deaf teacher to teach both hearing and deaf students together. I use signs, finger spelling, talk, act, pantomime-- you name it.

I think hearing students enjoy watching a ham like me.

Maybe my voice is a little different, like it has an accent. But after the first day or two, hearing students become used to me.

I helped to found the National Theatre of the Deaf. At that time, I was associated with Gallaudet College in Washington, DC, and we were trying to establish a professional theater program by and for the deaf. We submitted our proposal to the National Foundation on Arts and Humanities. They were interested, but they thought maybe we would have to wait a while, because there were other groups perhaps more worthy, hearing groups, like the American Ballet Theatre Group and Cornelia Otis Skinner and her theater group. While we were waiting, we got in touch with David Hays, who was one of the leading stage designers of plays on Broadway. He also was vice president of the Eugene O'Neill Theatre Center in Connecticut. So we got together with Dr. Boyce Williams of the Vocational Rehabilitation Agency in Washington DC, who was deaf himself, and with Mary Switzer, who is a leader in vocational rehabilitation. We all got together and met several times, and finally, the government decided to grant $350,000 to help establish the National Theatre of the Deaf. Ever since then, I've been closely associated with them as a faculty fellow. I go every summer, and I teach some courses in theater and work with young deaf students who come from different places, such as Gallaudet College, NTID, California State University at Northridge, various communities in the United States that have deaf theater programs.

We have even started to get foreign deaf students. It's really marvelous to see them interact.

These deaf students-- some come from Finland, some from Sweden, Denmark-- that's their sign-- Japan, and Australia.

It's a wonderful experience to see them interact and exchange ideas and share their skills every summer.

I have written myself and collaborated with some others to translate plays into sign language. Shakespeare's plays, such as Hamlet, Othello, and others, Greek plays like Oedipus, and other plays. We've translated them into signs to make it easier for deaf actors to read, interpret, and perform on the stage.

And I've also tried to pioneer a movement in deaf studies.

I've done research about deaf people who have succeeded in various careers-- in education, in government, in industry, in the arts, the sciences, in sports, and in theater. That's why the JCCC, Johnson County Community College, was nice to invite me here for a series of workshops.

Today, I visited KSD, the Kansas School for the Deaf, and I spoke before two different groups of young deaf students. I enjoyed that experience, talking about deaf heritage and about deaf pride, about deaf "can do."

Tomorrow and Saturday, I will have workshops at JCCC going through the deaf in literature--

novels, short stories, plays that have deaf characters in them.

What is the image of the deaf characters in these stories and plays?

What is the function of the deaf characters in those stories and plays? Why are they there?

What kind of impression does the reader get from them?

At the same time, I will present a lecture and show videotapes about deaf people who have succeeded in a variety of sports and in the theatrical world, the arts and the sciences and so on.

And finally, on Saturday morning, we will have a workshop on, quote, "Creative Interpretation of Literature in Signs."

That's one of the things we do, both at NTID and at the National Theater of the Deaf. We read things like poetry, such as selections from the Spoon River Anthology and Shakespeare and so on, and we interpret them and try to dramatize them in signs, making the poem come to life.

Maybe I could demonstrate with some examples.

In Flanders fields, the poppies blow, between the crosses, row on row, that mark our place. And in the sky, the larks, still bravely singing, fly, scarce heard amid the guns below.

We are the dead.

Short days ago, we lived, felt dawn, saw sunset glow, loved and were loved, and now we lie in Flanders fields.

Take up our quarrel with the foe. To you from failing hands we throw the torch; be yours to hold it high.

If ye break faith with us who die, we shall not sleep, though poppies grow in Flanders fields.

Whose woods these are I think I know. His house is in the village though; He will not see me stopping here to watch his woods fill up with snow.

My little horse must think it queer to stop without a farmhouse near between the woods and frozen lake, the darkest evening of the year.

He gives his harness bells a shake to ask if there is some mistake.

The only other sound's the sweep of easy wind and downy flake.

The woods are lovely, dark and deep.

My ears are deaf, and yet I seem to hear sweet nature's music and the songs of man, for I have learned from Fancy's artisan how written words can thrill the inner ear just as they move the heart, and so for me, they also seem to ring out loud and free.

In silent study I have learned to tell each secret shade of meaning and to hear a magic harmony, at once sincere, that somehow notes the tinkle of a bell, the cooing of a dove, the swish of leaves, the raindrop's pitter-patter on the eaves, the lover's sigh and thrumming of guitar, and if I choose, the rustle of a star!

Robert F. Panara is a legendary professor of English, literature, and theater. He is also known as a poet, historian, drama-club coach, and authority on deaf figures in literature. Shot at Johnson County Community College (Kansas) in 1984 during a workshop Dr. Panara was conducting, the production is divided into two parts. In the first, Panara provides an overview of the establishment of the National Technical Institute for the Deaf (NTID), for which he was hired as the first deaf professor, and how he taught both deaf and hearing students in the same class. He also started the theater department at NTID and helped found the National Theatre of the Deaf. In the second part, he performs creative interpretation of literature in sign language, including his own "On His Deafness." Dr. Panara demonstrates how he has inspired countless others to tackle the supposedly "inaccessible" and "challenging" literary genre of poetry and make it fun and enriching. Video provided courtesy of Robert F. Panara. 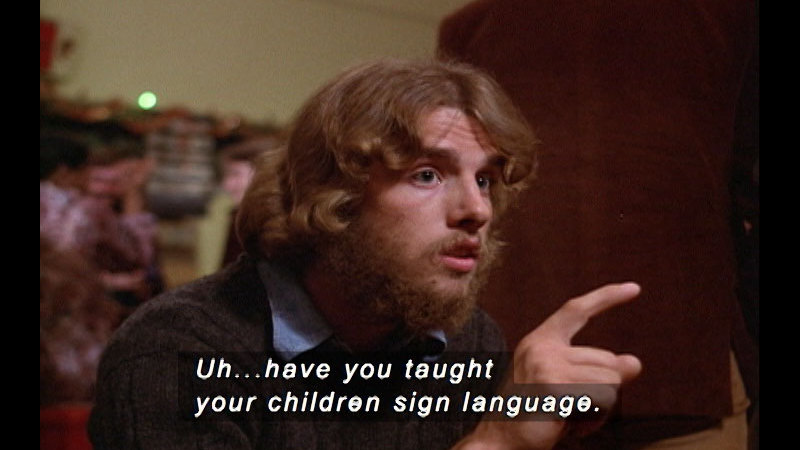 …And Your Name Is Jonah 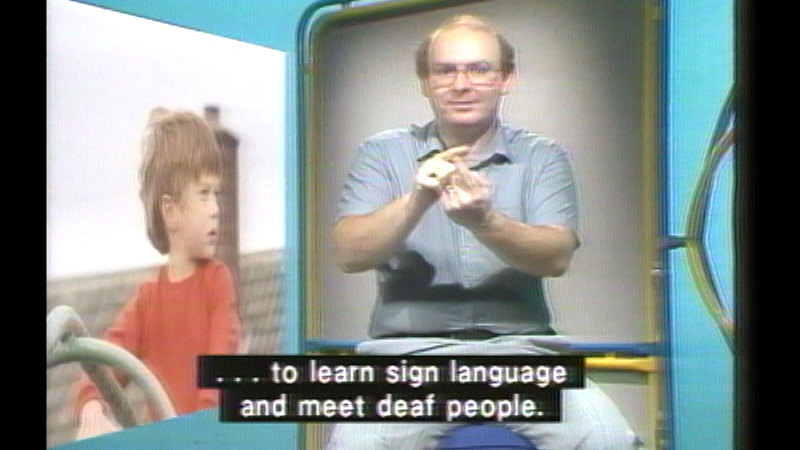 A Language For Ben 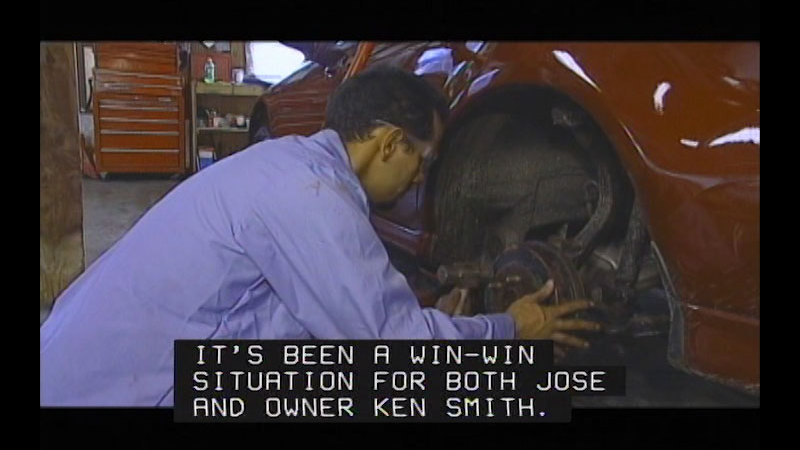 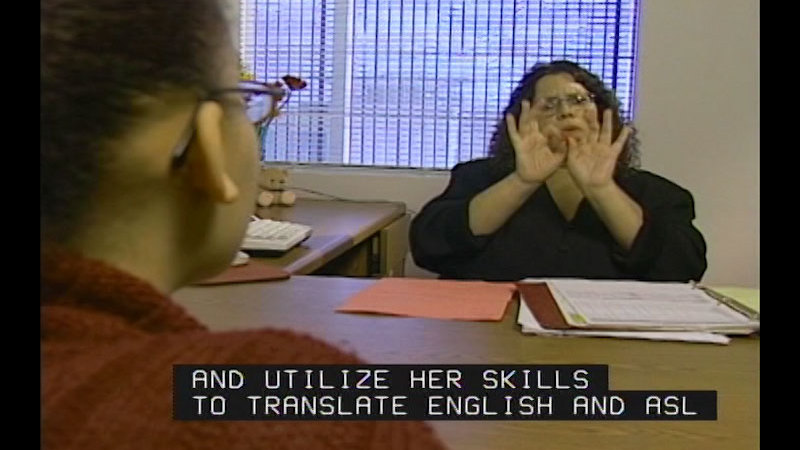 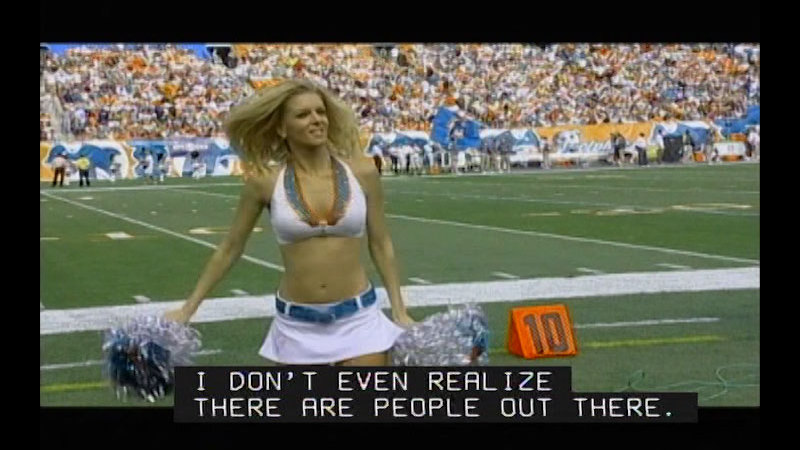 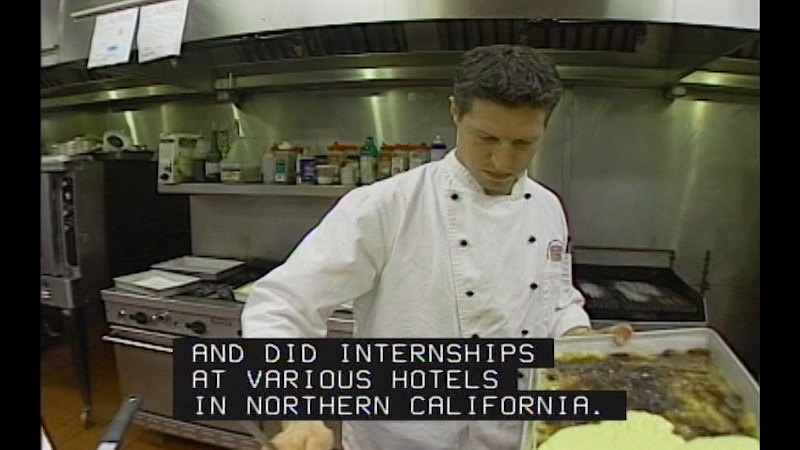 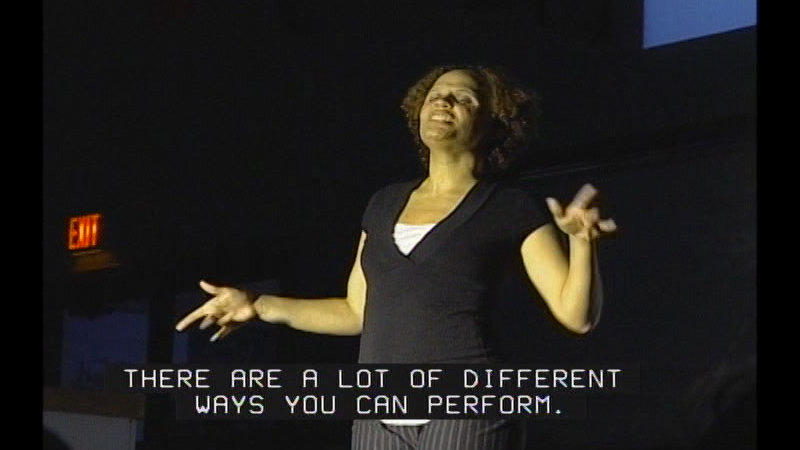 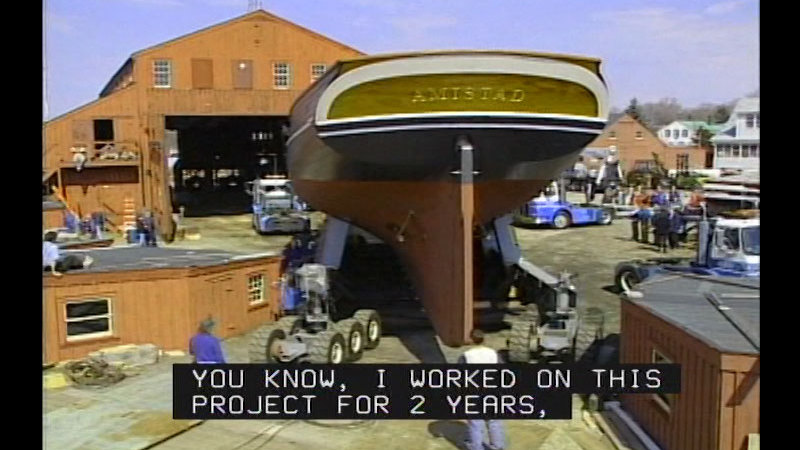 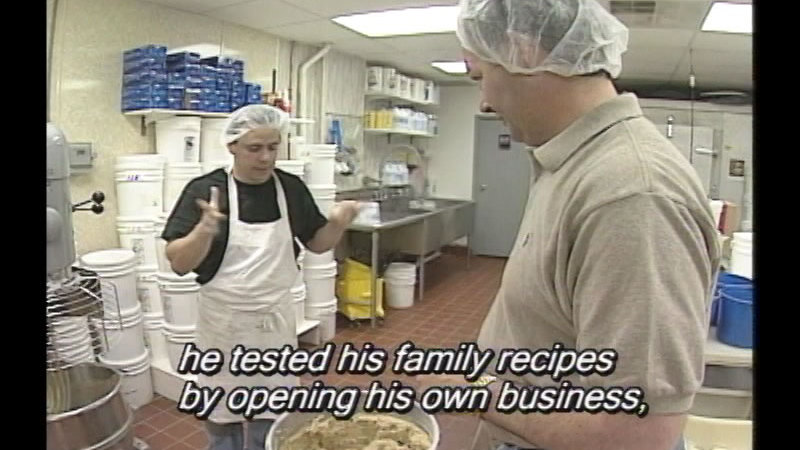 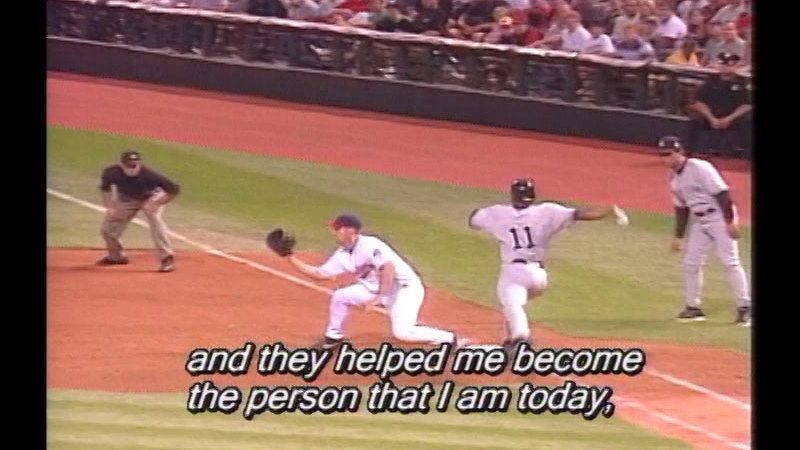