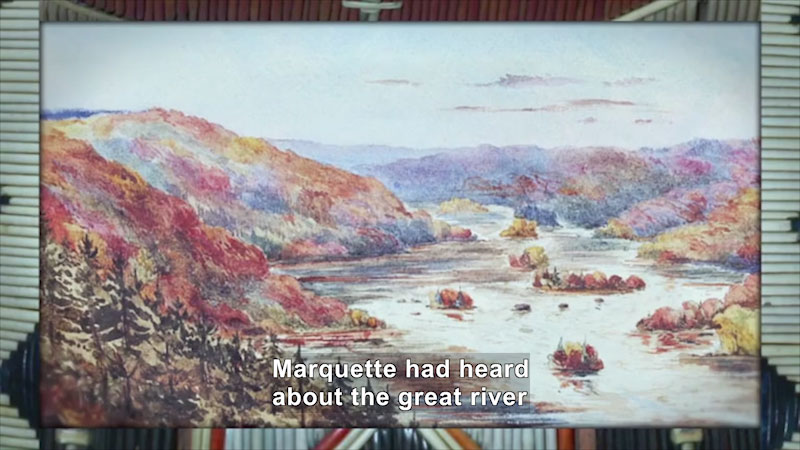 (female narrator) In the mid-1600s, two explorers were drawn together by the lure of the mightiest waterway in North America, known as the "Great River." Nobody knew where it led, or how long the journey was down what we know today as the Mighty Mississippi.

Jacques Marquette was born in France in 1637 and eventually became a Jesuit missionary. He was assigned to evangelize-- spread the word of God-- to native people in Canada. There, he learned the languages of the Algonquian and Montagnais tribes and headed west to the recently discovered Great Lakes-- the largest freshwater lakes in the world. While exploring the western end of Lake Superior in 1669, he became the first European to meet the Illinois tribe, who encouraged Marquette to continue exploring their lands, including an enormous waterway they called the Great River. Marquette had heard about the great river that some locals called the Mississippi and was anxious to share his religion further south. Soon, he was organizing a mission. Louis Jolliet, the son of a French colonist, was born near Québec in 1645. As a young man, he became a well-known fur trader, educated in geography and mapmaking. He traded with tribespeople deep in the woods, outside of the usual trading posts. He had heard of the Great River and hoped to find new sites to establish trading posts. Marquette and Jolliet met in 1671 at a European settlement in present-day Michigan. Despite their different motives-- to expand Christianity and open up trade routes-- their unique skills made them the perfect team to explore the great river, the Mississippi. They wanted to know where the Mississippi met the sea. Some believed it led to the Gulf of Mexico, while others, in hope of reaching Asia, believed it emptied into the China Sea--the Sea of Japan. Marquette and Jolliet needed to find the truth. They departed in May of 1673 with a crew of five men, two canoes, supplies, and trade goods. In two months, Marquette and Jolliet explored over 800 miles of the river's course, discovered two smaller rivers-- the Missouri and Ohio-- and reached the intersection of the Arkansas and Mississippi Rivers. Along the way, they made alliances with the indigenous tribes. Warned that hostile Spanish settlements were nearby, they decided to end their journey 450 miles from the Gulf of Mexico. Yet, they were able to conclude that the Mississippi did, in fact, flow there, since it had not turned west. Jolliet returned to Québec, became a professor, and continued exploring. Marquette continued with his missionary work and died in 1675 in present-day Illinois. Despite their different objectives, Marquette and Jolliet's teamwork exploring the Mississippi made their journey very worthwhile for France by opening the center of the continent south of the Great Lakes to trade and Christianity. It pushed the frontiers of colonization away from the Eastern coastal areas and gave France the opportunity to expand its power.

(Describer) Both men are depicted in statues. Titles: PBS Education. World Explorers: Louis Jolliet and Jacques Marquette. Accessibility provided by the US Department of Education.

In the mid-1600s, two explorers dared to explore North America's mightiest river, the Mississippi. Over two months, Jolliet and Marquette explored over 800 miles of the river and laid the foundation for European exploration of the center of the North American continent. Part of the "World Explorers" series.