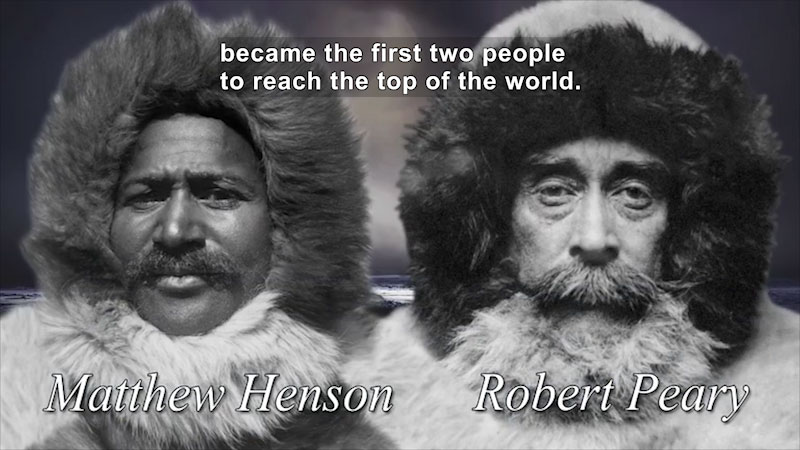 (female narrator) Since the ancient Greeks first understood Earth is a globe, people have known there must be a geographic, northernmost point-- the North Pole. Although the location was known in theory, no one had physically explored it. In the middle of a freezing ocean, covered in ever-shifting sheets of ice, where the sun doesn't rise for months, the North Pole remained untouched by humankind. That was until April 6, 1909, when Matthew Henson and Robert Peary became the first two people to reach the top of the world.

(Describer) As a timeline pointer moves to 1866, a map zooms in on the eastern United States. A young Black boy stands in a photograph.

Matthew Henson was a 12-year-old orphan when, in 1878, he found work as a cabin boy-- a young helper on a ship. Traveling the world, he learned seamanship, geography, history, and math. When the ship's captain died, Henson took a job as a clerk at a clothing store. This would prove a fortuitous decision. In 1887, Robert Peary, a 31-year-old U.S. Navy Corps of Engineers lieutenant, who had recently returned from exploring the Greenland ice sheet, went to a clothing store for excursion supplies. It was here that he met young Henson. The lieutenant was impressed with the clerk's knowledge and seafaring experience. Peary invited Henson to join him on future expeditions. Peary had a singular ambition-- to be the first man to reach the North Pole. In 1891, he and Henson explored Greenland, discovering its northernmost point, and establishing that it was an island. During their year living in Greenland, they met the local Inuit tribes, learning from them essential Arctic survival skills. Henson especially embraced the culture. He mastered their language, constructed igloos, and learned to drive dog sleds and train the dog teams. Sled dogs were critical members of an expedition team, often sensing danger ahead of the men.

Henson and Peary made five more historic trips to the Arctic, the region north of the Arctic Circle. In 1895, they charted the entire ice cap of Greenland. In 1897, they retrieved three giant meteorites from the Arctic ice, selling them to the American Museum of Natural History to finance their next expedition in 1902, where they tried, but didn't succeed, in their first attempt to reach the pole.

(Describer) They wear fur suits in a photo.

In 1906, a new ice-cutting ship, The Roosevelt, carried them farther north than previous vessels and they trekked closer to the pole than any human had before. They knew they were still 174 miles shy of their target, but turned back because they were running out of food. Peary, who was 50 years old, and Henson, just 10 years younger, decided to make one final attempt. On March 1, 1909, Henson and Peary, along with a team of 22 men and 130 dogs, set out for the North Pole. As in previous attempts, they encountered constant hazards on the ice pack-- steep mountains of ice called "pressure ridges," and breaks in the ice that created open expanses of water called "leads." Using a system he devised, Peary divided the men and dogs into six teams. Each team would reach its designated point along the path, build an igloo, and leave a cache of supplies for the return trips of others before themselves turning back. On April 1, after the last support team turned back, Henson and Peary began the final five-day dash. On April 6, taking many measurements with chronometers and sextants to verify their longitude and latitude, they confirmed that they were the first people to reach the geographic North Pole. Peary's accomplishment was honored with multiple awards. He died a celebrated admiral in 1920, and is buried in Arlington National Cemetery. Henson, as a black man, was denied the recognition he deserved. Many years later, at the age of 70, he was granted admission to the prestigious Explorers Club. Before he died in 1955, he received a Congressional Medal and was honored by two presidents for his bravery. In 1988, Henson's body was reinterred at Arlington, close to his old friend. Accessibility provided by the U.S. Department of Education.

While the geographic location of the North Pole was understood in theory, the hostile environment was not explored until 1909 when Matthew Henson and Robert Peary became the first people to reach the top of the world. Part of the "World Explorers" series.