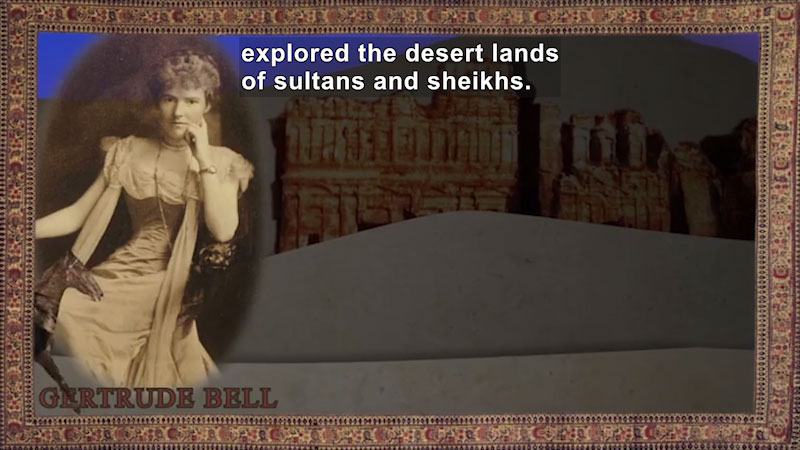 (female narrator) At the turn of the 20th century, a young British adventurer with a love of history and archaeology explored the desert lands of sultans and sheikhs. For nearly two decades, Gertrude Bell traveled thousands of miles across Persia, Turkey, and Arabia by horse and camel, visiting great cities and discovering, mapping, and excavating ancient ruins deep in the harsh desert. She became so intimately familiar with the Arab world, its geography and leaders, that the British government asked for her assistance in shaping the borders of modern Iraq after the end of World War I.

(Describer) As a map zooms in on the United Kingdom, the pointer of a timeline moves to 1868.

Gertrude Bell was born to a wealthy and politically active British family on July 14, 1868. She attended Oxford University, where she was the first woman to graduate with the highest-honor history degree. To pursue her love of archaeology, Bell decided to forego a life of luxury and privilege in England. She chose to live an itinerant and dangerous life, one of travel and adventure, almost exclusively reserved for men of that era.

(Describer) She stands by a tent.

Bell's long-term fascination was the ancient ruins buried throughout the Arabian Desert. In the 12 years before World War I, she made six journeys deep into uncharted desert and published five books about her travels and her archaeological excavations. Fluent in both Persian and Arabic, and willing to live in tents among nomadic tribes, Bell was accepted as a confidante by powerful sheikhs and other tribal chiefs. Prior to World War I, the Ottoman Turks ruled over many Arab lands. When the war began, the British military recruited Bell, who became the first female intelligence officer to convince free Arab tribes of Saudi Arabia to unite and join England to defeat their common enemy, the Ottoman Turks, and liberate their Arab brethren from Turkish rule. Together, they succeeded and the Ottoman Empire collapsed. After the war, the British government temporarily took control of former Ottoman provinces inhabited by Arabs. Bell then acted as a liaison, or link, between the British and Arab leaders in order to establish a single Arab government for the newly independent lands. She worked closely with British officials, like Winston Churchill, as well as powerful sheikhs, like Ibn Saud, the king of Saudi Arabia.

(Describer) He and Bell stand with others in a photograph.

In 1920, with consent from England and the most powerful Arab tribes, Bell drew the borders of the new nation. She called it Iraq. Bell recommended installing an Arab noble, Faisal I, as Iraq's first king. Until her death in 1926, Bell closely advised King Faisal in his attempt to develop a stable government in the newly formed nation.

(Describer) A group works in a desert.

King Faisal, in turn, assisted Bell in her archaeological pursuits. Unlike most archaeologists of her time, Bell advocated that antiquities should remain in their home countries, rather than being shipped off to European museums. King Faisal helped Bell establish the Iraqi National Museum. The artifacts that she discovered during her archaeological digs remain in Iraq, as do many ancient treasures that continue to be discovered in the region. When empires were collapsing and world order was in flux, Gertrude Bell used her deep insights of Arabian culture to help establish self-rule in Iraq. In the process, she shaped the modern Middle East as it is known today.

(Describer) A present-day map of the Middle East includes Iraq with the same borders. Titles: PBS Education. World Explorers: Gertrude Bell. Special thanks to the Gertrude Bell Archive, New Castle University for their gracious collaboration. Accessibility provided by the US Department of Education.

At the turn of the 20th century, young British adventurer Gertrude Bell left England to travel thousands of miles across Persia, Turkey, and Arabia. Her familiarity with the Middle East allowed her to eventually play a key role in establishing the borders of Iraq after World War I. Part of the "World Explorers" series.