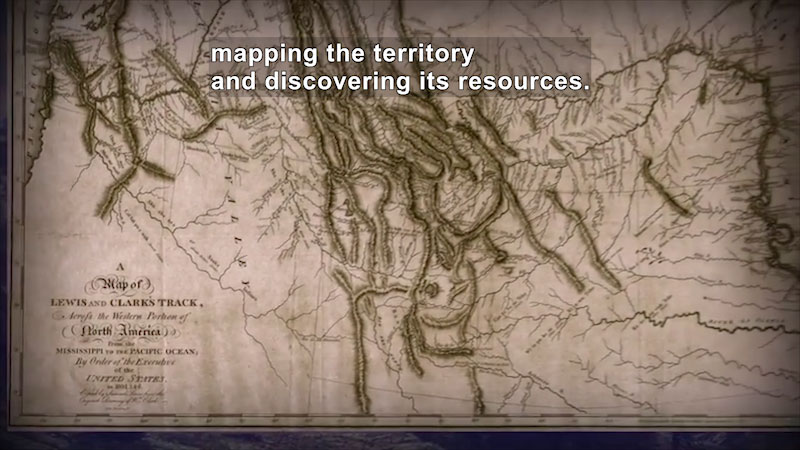 (female narrator) After Thomas Jefferson doubled the size of the United States with the Louisiana Purchase in 1803, he assembled an expedition to explore this territory. Leading the expedition were two former army captains, Meriwether Lewis and William Clark. Braving unfamiliar territory and dangerous conditions for more than two years, Lewis and Clark successfully crossed the entire western United States, mapping the territory and discovering its resources.

(Describer) A map zooms in on the eastern United States as a pointer on a timeline moves to 1770.

William Clark, born in 1770 in Virginia, was raised in a farming family of modest means. After his family moved to Kentucky, he joined the local militia, fighting battles against Native American tribes over the frontier territories of Ohio and Indiana. In 1792, he joined the new Legion of the United States-- the first standing army of the young country. Meriwether Lewis was born in 1774 in Albemarle County, Virginia, near Thomas Jefferson's home, Monticello. An avid outdoorsman and hunter from a young age, Lewis volunteered in the Virginia militia after graduating from college. In 1795, he joined in the Legion of the United States, serving as a lieutenant under the command of William Clark. After serving for six years, Lewis was appointed by his old neighbor, President Thomas Jefferson, to serve as Jefferson's personal secretary. At the start of Jefferson's presidency in 1800, France controlled the Louisiana Territory-- 828,000 square miles of land that sat on the western border of the early United States. When France offered to sell the land in 1803, Jefferson seized the chance to acquire new land for America. He wanted an accurate sense of the territory-- its native inhabitants, resources, and waterways. In 1803, Jefferson formed the Corps of Discovery and asked Lewis to lead the expedition. Lewis eagerly accepted and recruited his former commander, Clark, to share command. Jefferson wanted the expedition to map the land, record its natural resources, explore the waterways for a possible direct route to the Pacific Ocean, and establish the authority of the United States over the native tribes that inhabited the region. On May 14, 1804, Lewis, Clark, and four dozen other men set out from Saint Charles, Missouri. Traveling northwest, up to the Missouri River, the expedition was deep in the Great Plains by autumn. They built a settlement, Fort Mandan, in North Dakota, where they spent the winter. Members of the surrounding native tribes came to trade and build relations with the explorers.

(Describer) A stocky man and Native woman arrive at the fort.

At Fort Mandan, Lewis and Clark met Toussaint Charbonneau, a French-Canadian fur trapper, and his Shoshone wife, Sacagawea. Charbonneau and Sacagawea were capable translators, so Lewis invited them to join the expedition. When the river thawed the following spring, the party resumed its journey. As they approached the Rockies, Lewis and Clark realized there was no navigable waterway passage through the mountains, and thus, no direct waterway to the Pacific, as Jefferson had hoped. Instead, they would need horses. Fortunately, they were in Shoshone territory. Sacagawea helped them obtain horses from her tribe. Without her assistance in getting the horses to transport supplies over the mountains, the exploration would have ended in present-day Idaho. Even with the horses, while crossing the Rockies, rations ran low. There was no game to be hunted and temperatures were freezing. After over a month of fighting to stay alive, on October 7, the expedition emerged from the mountains and reached a branch of the Columbia River. Following the Columbia River through what is now Oregon, Lewis and Clark reached the Pacific Ocean by mid-November. They established Fort Clatsop and raised the American flag, signaling the U.S. government's claim on the Oregon Territory. In the spring of 1806, Lewis and Clark began the journey back to Missouri. reaching St. Louis on the following September 23, they found 1,000 people waiting to greet them and hail them as heroes. After the expedition, Lewis served as governor of Upper Louisiana before he tragically died on October 11, 1809, at just 35 years old. Clark lived until September 1, 1838. Because of his experiences with Native Americans over the course of the expedition, he was appointed to many official positions, including Superintendent of Indian Affairs, where he served as a diplomat between the U.S. government and native tribes. The expedition of Lewis and Clark had lasting effects on the United States. They established mostly friendly relationships between the government and dozens of native tribes. They claimed the Oregon Territory, stretching the United States territory from coast to coast. and they charted and mapped the huge Louisiana Territory. Traders and settlers used this information and immediately began pushing westward into the new territory, seeking the adventure and opportunity that would define the United States. Accessibility provided by the U.S. Department of Education.

After making the Louisiana Purchase in 1803, President Thomas Jefferson assembled an expedition to explore the vast territory. The expedition was led by intrepid explorers Meriwether Lewis and William Clark. Over a period of two years, Lewis and Clark successfully crossed the entire western half of the United States. Part of the "World Explorers" series.